The Byron Statics Briefcase Turntable With Built-In Speakers has one big selling point. An incredibly low price. Naturally, that means sacrifices had to be made, in order to keep the cost low. Sound quality was impacted the most, but to be honest, no suitcase style record player has great sound quality. It just isn’t possible. […] 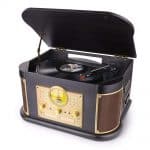 The D&L Vintage Wooden Record Player is incredibly popular, despite being slightly pricier than some of the other players I’ve reviewed. The reason for that is a gorgeous retro-inspired design and a whole bunch of useful features. And, even though it’s pricier than some, it still costs less than most players with this large of […] The 1byone Nostalgic Wooden Record Player is one of the bestselling vinyl record players on the market. The attractive retro-inspired design that takes us back to a simpler time has a lot to do with that, as does the attractive price. Few record players I’ve reviewed in this price range are this multi-functional. The 1byone can […] 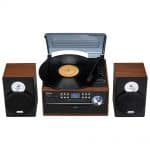 Suitcase style players were hugely popular in the 1950s and 60s, but they eventually fell out of style. They simply did not have good enough speakers to make people happy. But now several companies are making modern versions of this vintage turntable style. And one of the best is the CMC Portable Suitcase Bluetooth Turntable. […] 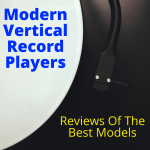 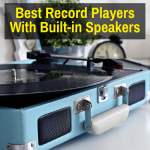