You are here: Home / Turntable Record Player Reviews
Crosley is famous for making some of the cheapest turntables on the market.

Unfortunately, they are also famous for low quality.

But not all of their record players are bad.

The Crosley Rochester reviewed here is actually quite good, considering what you pay for it. 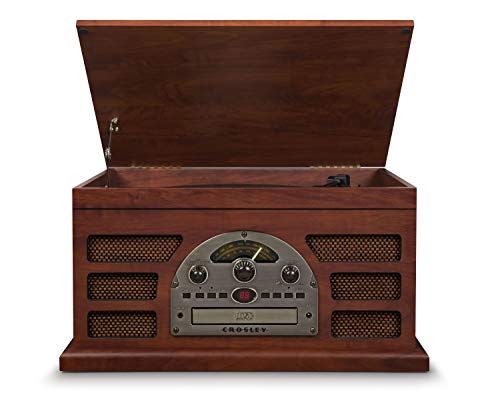 Crosley Rochester 5-in-1 Entertainment Center
4.5
Pros:
Cons:
View On Amazon
We earn a commission if you make a purchase, at no additional cost to you.

It looks stunning with it’s all-wood retro-styled vibe, and it plays just about any media format you might have.

But naturally, it will never sound as good as a high quality record player.

You can’t expect that at this price. But it does deliver far more than you would expect for what you pay.

Read the rest of this Crosley Rochester to find to exactly what you get for your money with this record player.

The Crosley Rochester is a 5 in 1 entertainment system, not just a record player.

It aims to duplicate the look of the old-timey record players that used to weigh 300 pounds and sit in the living room before there were televisions or the internet. 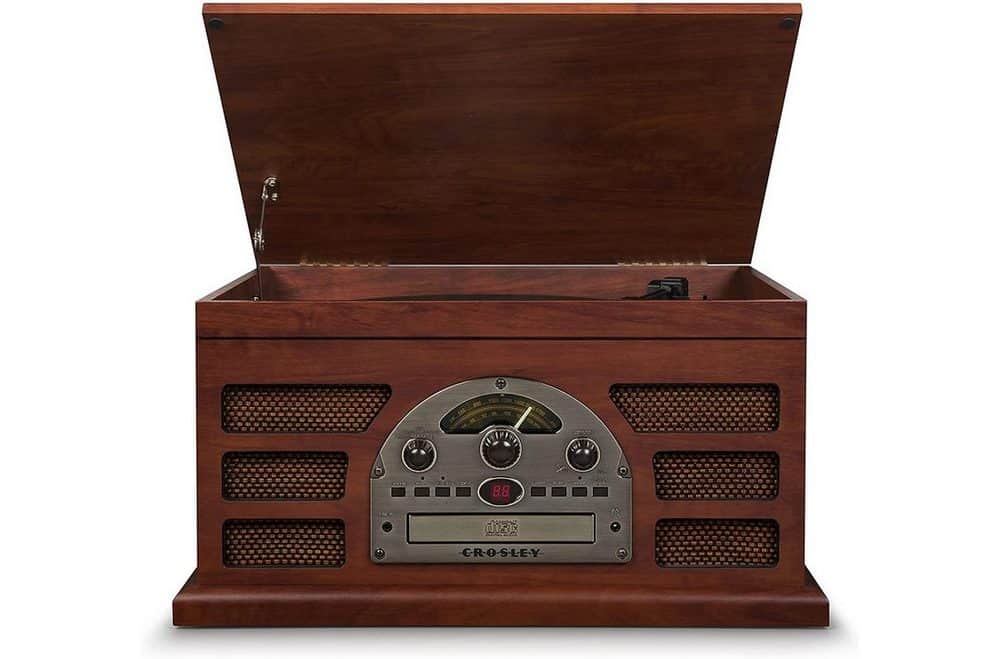 It has the early 1950s look to it on the face, with the round dials and needle-style tuning indicator. They certainly did a good job capturing that vintage vibe with the design. But what does the thing do?

Think of Rochester like your old all-in-one entertainment system that you had back in the day. Remember those in the early 90s? (Wow I guess I sound old.)

If not, they were one large unit that appeared to be several components all stacked on each other, but it was just one housing in one piece of plastic. That is exactly what this thing is. But it looks much cooler.

It will play cassettes, vinyl records, CDs, and it has an FM antenna for listening to the radio too. If you are counting, that is only 4 functions, so why do they call it a five in one?

Well, it also accepts input from external devices like your phone or something similar. Finally, it has Bluetooth capabilities (to me, that makes it a six in one).

Crosley Rochester 5-in-1 Entertainment Center
4.5
View On Amazon
We earn a commission if you make a purchase, at no additional cost to you.

The turntable part of this thing is belt-driven. Belt-driven record players are the preferred format for audio snobs since they are quieter, so Rochester has that going for it.

It will play 33, 45, and 78 RPM records, which are crazy because there are not many people out there that still have 78s that are not shattered to bits or scratched to infinity.

It will play CDs, cassette tapes, records, and your portable media device, while still having the option to turn on the radio. Do kids still listen to the radio anymore?

Comes equipped with a diamond stylus needle which is a nice bonus. It is never sound like a $500 audiophile cartridge, but for what you are paying, it is a good needle.

They went all out and built this out of real wood. This detail goes a long way to make the Rochester look sexy. It looks and feels like a relic of a not-so-forgotten age.

It weighs almost 18 pounds. That is a lot of mass for a portable unit. It will stay put wherever you place it and is wood so the corners should not chip or break easily.

Crosley could have easily made this out of plastic with a fake wood veneer, but they opted to use real wood. That tells you they are shooting for good quality here. 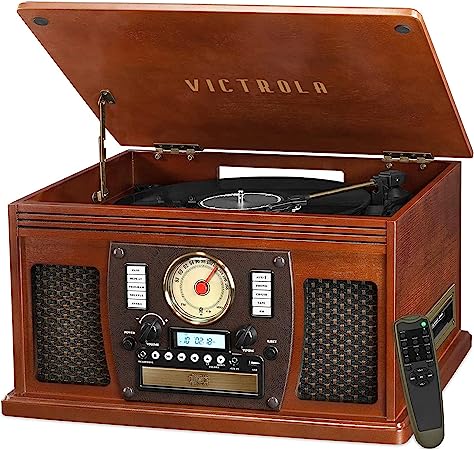 The Crosley Rochester and the Victrola Navigator are two units that occupy the same market slot, but they are not the same units. There are some important differences and similarities to be aware of before you make a buying choice.

If I had to choose between these two units, I am choosing the Victrola. It has more features and a few key features that make it a much more versatile choice.

The ability to rip your records to PC (and the software too) is a big benefit of going with the Victrola.

Of course, it will cost you a bit more too. But pound for pound, dollar for dollar, the Victrola would win in a head-to-head battle.

However, Crosley is the market leader for a reason. They found a way to make good quality gear for much less than the competition. The Crosley is extremely impressive for the price, but in a head-to-head, I pick the Victrola.

Read our full review of the Victrola Navigator for more.

The Crosley Rochester 5-in-1 Entertainment Center is a versatile, affordable option with a stunning retro vintage look.

It will do just about anything you need to play your old media as well as your new media. It has a radio tuner for checking out the radio, and it is made of wood which gives it a classy vibe.

My only real complaint about this thing is that they do not include a remote control or have USB output to rip your records. If those features are not a big deal to you, you can’t beat this for the money.

I give it a Top Record Players rating of 4.5 out of 5. The Victrola Navigator scored a 5, so I had to score this one slightly lower.

Crosley Rochester 5-in-1 Entertainment Center
4.5
View On Amazon
We earn a commission if you make a purchase, at no additional cost to you.