Everyone knows how to use a record player, don’t they?

Yes, I suppose anyone can use them. But not everyone knows how to use one correctly.

And if you use it incorrectly, you can cause damage to a precious record.

If you’re thinking of buying a turntable, or you already have one, it is important you know how to use your record player correctly.

That’s why I decided to write an entire article on the subject.

Not only will you learn how to use a turntable, you will also learn the major components and how they work together to take sound information from a vinyl disc and bring it to our ears via a set of speaker.

I also cover some frequently asked questions toward the end of the article. If you have additional questions, feel free to leave a comment, as always.

How To Set Up A Record Player

If you want to learn how to correctly set up and use your record player, you first need to understand its basic components. Regardless of the make or model, whether it’s a modern unit, or a vintage-style record player from the 1960s like this suitcase-style player from CMC, most models come equipped with the same components.

The platter, also confusingly referred to as the turntable, is one component that every record player shares. It holds the vinyl records and spins them at a consistent speed.

The record’s platter can be made out of aluminum or other type of metal. Some manufacturers will cover the platters with a thick felt or plastic in order to prevent static or scratches, which can damage a record.

One of the most important parts on any record player is the arm. It contains two important components that are needed to play a record: the needle and the cartridge.

The needle is equipped with a diamond tip and runs along the grooves of the record, creating vibrations that are then transmitted to the cartridge.

Some audiophiles will upgrade both the arm and the needle, using vintage or modern alternatives. This can get pretty pricey, but nothing does more to improve sound quality than a good tonearm, needle and cartridge combination.

If you’re new to vinyl records scene and you’re looking for a your first record player, it’s usually best to start off with a turntable with a built-in preamp. There are many beginner-friendly, entry-level models that come equipped with a preamp.

If your unit does not have a built-in pre-amplifier, you will need to buy one separately to convert the phono signal into a line level signal that can be processed and made ready for output to the speakers (which requires it being amplified once more in an amplifier).

Essentially, the preamp boosts the weak signal from a record player to the same level as other sound signals. Purchasing a model with a built-in preamp makes it much easier to get your player set up and ready for use. More on record player preamps here. If you get a record player that comes equipped with built-in speakers, you can start listening to records right away. If not, you’ll need external speakers.

And to be honest, even if your unit has speakers, you will probably still want a good set of external speakers. The built-in speakers generally don’t get very loud and leave a lot to be desired, in terms of sound quality.

Some models, like the Victrola Aviator, come with a 3.5 millimeter line out jack that you can use to wire external speakers.

If you have an external preamp make sure that both the record player and speakers are hooked up correctly to the preamp. The turntable connects to the input and the speakers (or the amplifier, if the speakers are not powered) connect to the output.

Bluetooth connectivity essentially eliminates the need for extra wires and cables, so your set up will look nice and clean. It also has a longer range than any normal cable.

In order to use this feature, just connect a device or speaker to your record player using the Bluetooth setting and simply press play. That’s how easy it is. Records are designed to play at a few different speeds; 78, 45, and 33 1/3 RPM. The speeds are measured based on the number of rotations the record will make per minute. This is referred to as rotations per minute, or simply RPM.

The majority of the time you’ll probably listen to full length albums, which measure twelve inches in diameter. These records are designed to spin at 33 1/3, which is the default setting for most turntables.

78 RPM records were produced way back in 1895 up until 1955 and aren’t in production these days, so you probably won’t have to worry about dealing with 78s, unless you possess very old records. Many new models don’t even come with a 78 RPM speed option.

Look for the record player’s on switch. Once pressed the record should begin to spin. Make sure you have the record set to the correct speed. If you’re using a standard record, it should be 33 1/3 RPM.

With the record spinning and the arm in position, you can now use the cue lever to lower the arm. This will bring the needle into contact with the record. Once it makes contact you should begin to hear music. You may notice that there are thin segments that look different from the rest of the vinyl record and form circles. Each of these circles is the dead space between two tracks.

Most beginners are scared to change tracks at first, since doing so incorrectly can result in a scratched record. But if you go slow and become familiar with the way your record player works, you should have no trouble getting the hang of jumping from track to track.

How Do You Store Vinyl?

Storing vinyl correctly prevents damage to your record collection, such as scratches or warping. Records are very fragile and can easily be damaged if you fail to take the necessary steps to protect them.

To store them correctly, make sure you keep them upright and avoid stacking them. When stacked, the weight of the records can cause warping.

The needle must make good contact with the record, but it shouldn’t be too heavy. At the same time, it the contact can’t be too light either. If you track too lightly then the needle will end up bouncing around in the grooves which is bad and can lead to damage.

Ideally, you should track at the top end of the recommended tracking force. Remember, when you track too lightly it can end up causing as much wear and tear as tracking too heavily.

Do I Need to Clean My Vinyl?

Many people mistakenly believe that the hissing and cracking sounds they hear when they play a record are normal. These sounds actually point to a dirty record.

In order to avoid these sounds, you must clean your vinyl regularly. To do, you can use a brush that’s specifically designed for records. These brushes are made up of thin carbon fibers which do a great job of getting the dirt and debris out of the grooves of your vinyl.

You can also use a specific record cleaner fluid combined with the brush in order to get deep down into the grooves. You’ll notice a difference in sound quality immediately after you’ve cleaned your records.

The most important thing when cleaning your record is to follow the proper procedure, to avoid causing damage.

This post covers the whole cleaning process from start to finish.

Cleaning the needle can also have an impact on sound quality. A dirty needle can make your records sound terrible. There are plenty of brushes and products to choose from that are specifically designed to clean the needles on your record player.

The needle will not need to be cleaned as often as your vinyl, but if you’ve cleaned your records and you’re still noticing a dip in sound quality, then the odds are a dirty needle is to blame. To learn more, read my article on record player maintenance.

Now that you know how to use a record player, the speed to set it at and how to play a record without scratching it, you can get started on your path as a new audiophile.

Remember, change up the speed of the record player based on the size of the record you’re playing, carefully touch the needle to the surface of the record in order to avoid scratching it, and always keep your vinyl clean for ultimate sound quality. 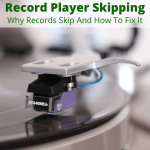 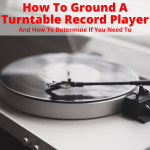 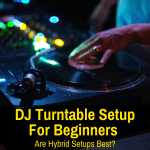