You are here: Home / Record Player Advice / Turntable Preamps Explained (And Why You May Not Need One) If you want to hook your record player up to external speakers or audio systems, you need a preamp.

But you may already have one, without even knowing it.

So do some of the components you might want to connect to your turntable, like a receiver or amplifier.

If that is the case, you won’t need to buy an additional preamp.

These internal units are also referred to as a phono stage.

Often the two terms are used interchangeably, but generally, a phone stage is a built-in preamp, while the word ‘preamp’ can refer to any preamplifier, whether it is internal or standalone.

How do you know if your record player or other component has an internal preamp? And if it does, is that phono stage any good?

We’ll answer those questions and more. By the time you get to the bottom of this page, you will know everything you need to know about phono preamplifiers.

The Role Of  The Phono Preamp (Or Phono Stage)

With a new rise in popularity of vinyl over the past several years, the market is exploding with a whole new generation of record players containing the latest plug-and-play technology.

Those new to vinyl expect a turntable to simply play out of the box. Or they anticipate a quick setup that allows them to easily integrate their new turntable into an existing sound system.

But it’s not quite so simple.

That is where a preamp comes in.

Whether it is a phono stage or an external preamp, it boosts the signal from the turntable to the correct level, so that it can be received by your stereo system or speakers.

What Does A Phono Preamp Do?

Even those new to the vinyl world know most of the basics, such as how to play a record player, what type of speaker setup is needed, or even how to connect a turntable to a Bluetooth speaker.

But preamps are a different matter.

Even some seasoned audiophiles don’t know much about preamps, or the important role they can play in an audio setup.

A turntable preamp is an audio component that amplifies the signal from a turntable to a higher level, so that it can be received by an audio system, the same way it receives any other type of audio source, like a CD player, etc.

We won’t go into any more detail on the RIAA curve. You can read more about it here. Those new to vinyl usually aren’t interested in the complexities of how a preamp work. The most important thing to know is that a preamp is needed in order to enjoy your collection at a volume you can actually hear.

Does Your Turntable Have A Preamp?

Preamps come in a variety of shapes and sizes. Some models are built-in, and many modern turntables do have a phono stage.

Others do not, meaning you’ll need a standalone model. Most audiophiles actually prefer to use a separate preamp, but whether or not it can actually make a difference often depends on the rest of your sound system.

How do you know if your turntable has one?

There’s actually a pretty simple way to determine this. Try hooking your record player up to your audio system or speakers. If the volume level is high and there are no signs of distortion, then you have a model equipped with a built-in preamp.

Many new record players, such as the Audio Technica AT-LP120, come with a built-in preamp. But not all self-contained turntables do.

The good news is: you don’t have to purchase a top of the line model to get a phono stage. You can find plenty of low priced turntables that have one and plenty of high-priced models that don’t.

If you are currently shopping for a record player and plan on connecting it to an audio system like Sonos, a receiver, or speakers, but you don’t want to purchase a separate preamp, make sure your the model you buy has an internal preamp.

Unless, that is, the component you plan to connect to already has a phono preamp built in.

Amplifiers And Receivers With Phono Stages

If you have a vintage amp or receiver that was produced before 1980, then it’s likely it has a built-in preamp.

If you’re not sure, look on the back of the device. You should see a label that says phono, with a ground screw right next to it. If you do, it has a preamp.

Most new models of receivers and amps don’t come with a built-in phono preamp, but they may have a label that says phono anyway.

Another way to determine whether or not your model has a phono stage is to plug in your record player and try turning up the volume. If it sounds clear and the volume is booming, then it comes equipped with a built-in phono stage.

A new category of high-quality powered speakers has made an appearance on the market over the last several years. The speakers can be used for your vinyl playback system, desktop computer, or a small bookshelf system. They can connect directly to the turntable without a receiver and some of these speakers actually come equipped with a built-in preamp, too.

The preamp performs a process on a scale that no other component in the phono audio chain comes close to matching. Instead of just being an added-on component that helps your system run smoothly, it actually shapes your turntable’s performance and ensures it is able to work with the rest of your system.

The turntable preamp adds gain to the output of a record player so it can be received by an amp, which then further amplifies the sound for your speakers. The amount of gain that’s added to the signal by the preamp is tremendous.

On the turntable, electric power is applied only to the process of spinning its platter. The stylus in the cartridge does not actually receive any of this power.

The stylus is the component that generates a signal from the grooves in the vinyl record via movement. This audio signal is then converted into an electrical signal. But this signal is very feeble. With most models, it has an output of 4 mv.

This is nowhere near the strength of the audio signal from other components like a CD player, so it needs to be boosted. A basic preamp boosts the signal to an output of 300 mv.

In other words, a signal must be amplified by a factor of 75 in order to be of any use to the amp.

As you can see, the preamp has a serious job to do and has a major impact on vinyl playback and how your record player performs.

Fortunately, purchasing a top of the line preamp won’t cost you hundreds of dollars. You can easily find a high-quality, standalone model for around $150.

We highly recommend the Schiit Mani.

You can also find units that aren’t quite as high quality, but that cost far less and still do a good enough job for the casual listener.

This model by Rolls is the best budget option.

A standalone model comes equipped with its own chassis and power supply. They usually run quieter than a built-in preamp.

With the addition of a preamp, you’ll notice immediate improvements to channel separation, and signal-to-noise ratio and torsion will basically disappear. Modern models are remarkably quiet during operation and the impact they have on playback is simply astounding.

The type of preamp you need depends on the cartridge type and your budget. Your record player may come with a built-in phono stage, in which case you won’t need to worry about choosing a new model.

Additionally, if your audio system comes with a phono input with a ground screw installed next to it, this means that it has a built-in preamp. As long as it is compatible with your turntable, you don’t need to buy one separately.

However, most audiophiles argue that an external preamp offers better sound quality on average than an internal phono stage. Read our article comparing a built-in preamp vs external for for more on this.

If you need to, or want to, buy an external preamp, the main thing you need to know is that there are two types available: the moving coil and moving magnet.

The moving coil preamp is the more popular type, because the slow-moving mass allows it to reach a higher frequency. This generates a lower impudence, which means there’s a lower chance of RFI, or radio frequency interference.

However, it is placed under more stress than a moving magnet preamp and also provides a much lower output of only 0.5 millivolts. It has fewer coil windings and a much higher price tag. Due to the low output, especially when it comes to bass frequencies, moving coil preamps require a minimum of ten times more preamp gain compared to the moving magnet variety.

The moving magnet preamp delivers a high-end output of around five millivolts. As such, it requires far less gain and it also costs a lot less. The sound quality is inferior, however.

Most preamp manufacturers work hard on designing models that are extremely low noise, which is a huge plus for any serious audiophile. That said, it really doesn’t matter if you have a phono stage that’s only a few decibels quieter than the vinyl itself. The vinyl surface noise will still dominate.

The preamp is a vital component that deserves just as much care and consideration when you’re shopping for a turntable, as the record player itself. Whether the preamp is internal or a standalone unit, you want to make sure it is capable of delivering the audio quality you are looking for.

With any audio setup, the sound quality of your system will only be as good as the weakest point in your signal chain. It’s important to invest in a good cartridge, stylus, and turntable, to ensure that the signal chain gets the best start possible.

But you can’t stop there. Invest in a good preamp to make sure the sound quality stays high after the signal leaves the record player. 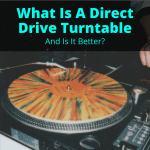 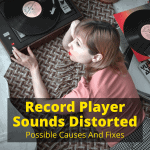