Sometimes simple is the way to go.

The Wrcibo Vintage Record Player is about as simple as it gets. It does not have a bunch of fancy features or flashy design elements. Wrcibo Vintage Record Player
4.0
$79.99
Pros:
Cons:
View On Amazon
We earn a commission if you make a purchase, at no additional cost to you.

It plays records and does so well. It gives you a number of ways to listen to them (built-in speakers, external speakers, headphones). It plays music from a smartphone or other device.

Beyond that, it doesn’t do much else.

It also doesn’t cost much.

Does it have weaknesses?

Of course. Any player has weaknesses. Especially at this price. Read on to find out what the Wrcibo does well and where it lacks, and whether it is the right turntable for you.

Wrcibo has created a vintage style record player that comes with plenty of basic features but falls short in terms of certain modern upgrades that some audiophiles are looking for. In regard to style, it can be described as simplistic, and almost elegant. 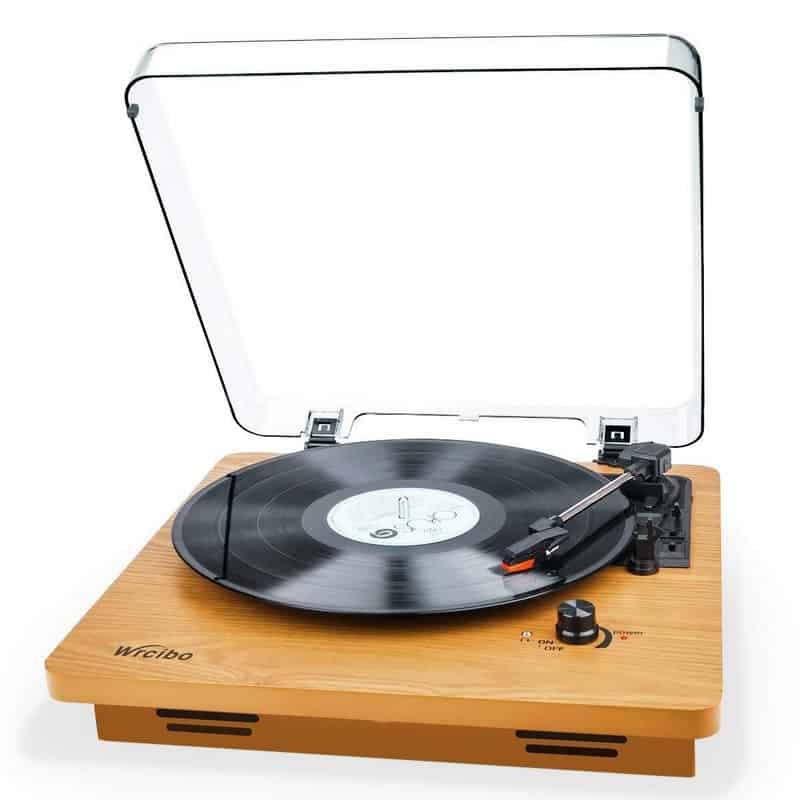 This rather plain turntable is a three-speed model that comes with RCA outputs, allowing users to connect to HiFi systems. It also comes with built-in speakers, and a three and a half millimeter aux input/headphone jack.

In terms of overall quality, you’ll find that this record player performs about as expected. While there may be nothing spectacular about its appearance, this is a great starter record player or a good choice if you’re looking for a smaller turntable for bedroom use.

At first glance, you’ll notice the simple design and the gorgeous natural wood finish that gives it a somewhat classy look. This model has a modish look that many vinyl enthusiasts love.

In fact, unlike bulky overloaded competing models, this record player has a simple look that allows it to easily blend in with your room’s decor. It’s not the flashiest model on the market, but it’s able to get the job done if you’re looking for a low-priced record player that’s reliable and able to play your records.

This is a belt-driven record player that features a semi-automatic play tone pickup arm and a ceramic cartridge. The design is very minimalist. This is not a feature-packed record player by any means.

It comes with a removable dust cover, a flat turntable, and a few controls. It’s definitely not as flashy as higher priced models, but it has a charming retro feel that most audiophiles can appreciate.

So, what is a ceramic cartridge and how does it impact the quality of a record player?

Basically, the cartridge is like a type of transducer.

A record features thousands of grooves. When a record plays, the needle runs through the grooves. As the needle vibrates in the grooves, those vibrations travel through the tone arm to the cartridge, which turns them into an audio signal. That electric signal is fed into the amp (whether internal or external).

Many consider ceramic the best type of material to use since ceramic cartridges are more reliable and rugged than other types, like moving magnet cartridges.

The record player also comes with two small built-in speakers. As you would expect, these speakers aren’t exactly powerful enough to handle your entire audio system or for use during a party, but they’re definitely loud enough for casual use.

If you want to crank the volume up, you can use the aux input and hook up a receiver, or you can pair it with a couple of active speakers.

Built-in speakers that are too quiet is a common issue that most record players have, so it’s not exactly a deal breaker for potential buyers. If you normally use headphones when listening to your records, then this probably won’t be an issue at all.

This is a three-speed record player, which means it can handle 33, 45, and 78 RPM. It comes with a speed switch that you will need to manually change based on the type of record you’re playing.

Ten-inch discs are much rarer than the seven-inch and twelve-inch records, these days. They were more common in the past and very old records are usually the ten-inch variety. These records play at seventy-eight RPM.

Although this Wrcibo turntable is classified as a three-speed because it can play all three types of records, you may need to replace the needle for older ten-inch records, because they have much wider grooves. This is only an issue with records produced before the 1950s.

Wrcibo Vintage Record Player
4.0
$79.99
View On Amazon
We earn a commission if you make a purchase, at no additional cost to you.

This model features a sleek design that’s instantly recognizable as vintage inspired. It has a couple of built-in speakers which are more than enough for quiet listening.

If you prefer louder sound you’ll want to hook it up to a pair of active speakers. Since it also has a headphone jack, you can also plug in a pair of headphones and listen to your music at a louder volume that way.

While the included speakers can best be described as adequate, this model’s ability to source out to powered speakers or a receiver can allow you to take the volume to a whole new level.

The aux input gives users another way to use this record player since they can play songs using their smartphone or another type of mobile device.

Unfortunately, this model doesn’t come with Bluetooth connectivity, which would have been a great addition and a feature that would have made it a little more versatile.

In terms of design, the Wrcibo features a natural wood finish that’s very understated. It also comes with a removable dust cover, which will keep the record player clean, and free from dust when not in use.

If you’re not familiar with how to use a record player, then this can be a great starter model. Its simplicity and intuitive controls, make it a good choice for the casual listener or the beginner.

This turntable is great for anyone who wants a simple player and doesn’t need a whole lot of flash. It also appeals to the audiophile on a budget, or anyone wanting a beginner-friendly model.

If you’re looking for a more feature-packed player that’s available at a comparable price, then you’d be better off with Victrola’s extensive line of multitasking record players.

The Wrcibo record player is rather plain when it comes to both aesthetics and features. It comes with a couple of built-in speakers, a ceramic cartridge, an AUX input, and a headphone jack, but that’s about it in terms of features.

Competing models such as the Victrola Navigator record player have more to offer including a built-in cassette player, CD player, and AM/FM radio. Truly, it’s a record player that comes loaded with all the bells and whistles the audiophile could want, although its speakers are also lacking in the power department.

This Wrcibo lacks Bluetooth connectivity, while the Victrola record player is Bluetooth ready and will allow you to play your music wirelessly, from any type of Bluetooth compatible device.

Like the Wrcibo, the Aviator also features a beautiful wooden finish with a vintage feel. Basically, if you’re looking for a multi-functional record player, the Victrola is a better option.

If you’re simply looking for a record player for casual listening purposes then this basic record player by Wrcibo will be a nice fit. To learn more about vintage style record players and the different features they have to offer, head here to read my buyer’s guide.

As you can see, despite the fact that it may not come loaded with a CD player, cassette player, or other bells and whistles, this model is still a steal for the price.

Like other models in this price range, the speakers aren’t very loud, but this can easily be remedied by hooking up the unit up to a receiver or a pair of powered speakers.

Aside from the lower volume, you’ll be hard-pressed to find any performance issues with this model. I give it a Top Record Players rating of 4.5 out of 5.

Wrcibo Vintage Record Player
4.0
$79.99
View On Amazon
We earn a commission if you make a purchase, at no additional cost to you.