You are here: Home / Turntable Record Player Reviews
Looking for a record player that plays records and nothing else?

You’re in the wrong place.

Sure, the Victrola Nostalgic Navigator Wood 8-in-1 Turntable plays records. But it does so much more. Victrola Navigator 8-in-1 Stereo System
5.0
$149.98
Pros:
Cons:
View On Amazon
We earn a commission if you make a purchase, at no additional cost to you.

It is loaded with features. You can play music in any from you can think of: CD, cassette, vinyl, from USB, from a smartphone or other device via Bluetooth or cable connection, or the radio.

It also has built-in speakers that are far better than you would expect from a unit in this price range, though they obviously can’t compete with a good pair of powered external speakers.

And on top of all of that, it just looks cool. The vintage design harks back over 100 years and looks great in any home, thanks to the multiple color options.

But it is a budget player, so obviously it is not all good news. Read the rest of this review to learn what Victrola does right and what they do wrong with the turntable/entertainment center.

By the end, you’ll know for sure if it is the right model for you. 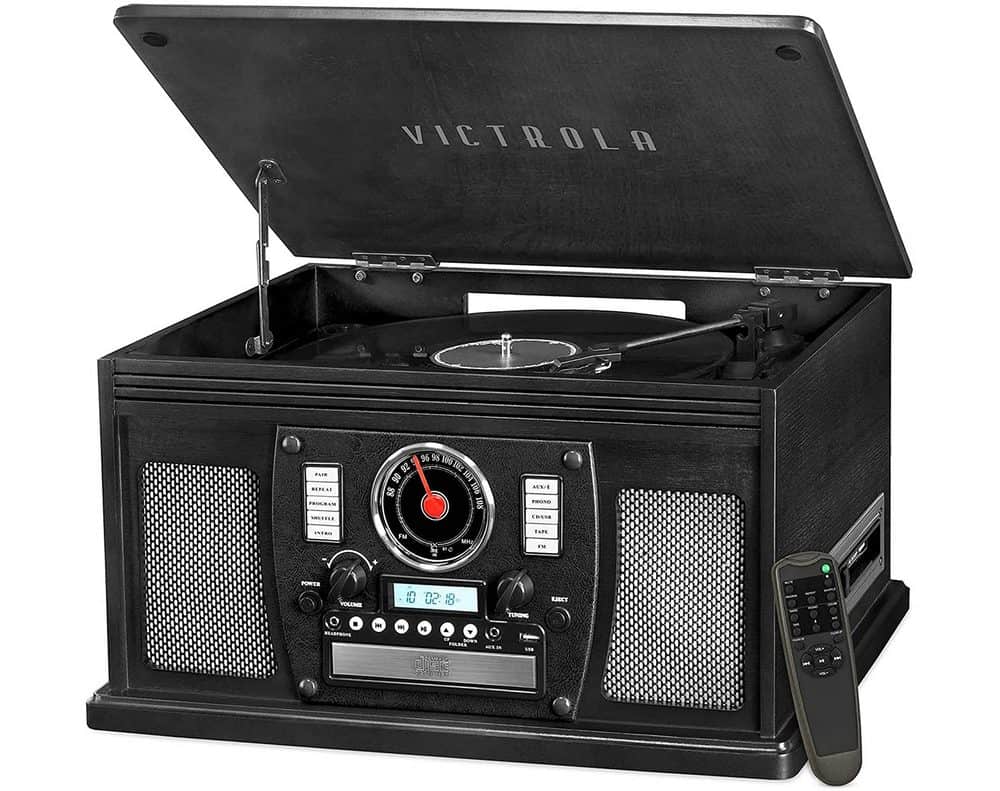 This classic record player is actually an update of the hugely popular Victrola Aviator player, but surprisingly, costs quite a bit less.

It may look like a well-cared antique from the outside, but on the inside, it’s loaded with beautiful modern features that make it the perfect versatile music system for whole family. .

Even if you don’t know how to use a record player, the model’s intuitive design makes it fun and easy to use to listen to your favorite tracks.

It weighs in at a little over twenty-two pounds and is somewhat bulky, which means it’s not very portable or storage friendly. It would do best with a permanent spot in the home.

The 8-in-1 Navigator turntable by Victrola is loaded with even more features than the 7-in-1 Aviator had, including:

Immediately, you’ll recognize the brand name and wonder if it’s possible that this is the same Victrola that made their start decades ago.

Victrola is a company that first introduced their innovative turntables way back in 1906, through their parent company the Victor Talking Machine Company. Since their rise in popularity all those years ago, they have sold more than seven million radios and record players.

Their latest model, the Nostalgic Navigator, features the same design that made them a household name over a hundred years ago, but that’s where the similarities end.

This is the ultimate vintage sound system. Not only do you have a variety of media to choose from to play your favorite music, but Victrola also offers this model in five different finish options:

Unlike some products you may come across, each of the finish options is priced the same. You can choose the finish that best matches the existing decor in your home, and not pay more for it.

Even after all of these years, it shows me that Victrola still knows what their customers want and I appreciate extra touches like this. This Victrola vs Crosley’s vintage player comes out ahead for sure.

This record player comes with all the bells and whistles both the beginner and audiophile will love including:

If replacement parts are needed, such as the tonearm or needles, you can reorder directly from the manufacturer.

This model is covered by a one-year limited product warranty. One look at the Navigator and you’ll fall head over heels in love. The classic design will easily blend into your home’s decor, especially if you enjoy collecting antiques or shabby chic furniture.

The rich, real wood construction adds some class and style to this retro piece. The front portion of the record player features elegant, yet subtle chrome details, with the stereo speakers, CD player, and cassette player.

It also comes equipped with Bluetooth capability which will allow you to wirelessly play your music from any type of Bluetooth enabled device, such as your smartphone.

You can stream music wirelessly, no cords required, but when you listen to music via vinyl records or cassettes then you’ll have to plug it into the nearest outlet. Fortunately, the included cord measures in at six feet in length.

The 3.5 millimeter aux-in cable and will allow you to connect your record player to any type of device that is not Bluetooth enabled. The RCA inputs perform the same function. There are also RCA outputs, so you can connect to external speakers.

This model comes with a remote control for that extra touch of convenience. The fully operational remote will control the CD player, turntable functions, and volume. The one thing it does not control is the power, unfortunately.

This is a three-speed turntable that runs at 78, 45, and 33 ½ RPM, in order to accommodate a variety of vinyl formats.

The Navigator player can do pretty much everything, including allowing you to stream your favorite music via your smartphone, at a distance up to thirty-three feet.

Setting up takes about ten minutes at most. You won’t have to install any software programs or use your PC in any way.

The package comes with a fully functional remote control that allows you to sit back and relax. It also includes three bonus replacement needles, a 1GB USB drive and a cleaning cloth for your convenience.

Victrola Navigator 8-in-1 Stereo System
5.0
$149.98
View On Amazon
We earn a commission if you make a purchase, at no additional cost to you.

Not only can you listen to your favorite music via streaming, vinyl, CDs, or cassettes, this model also comes with built-in FM radio capability, so you can tune into your favorite station and listen to weather reports or catch the latest podcast.

This package includes a remote control that allows you to turn up the volume, or start a CD, or switch radio stations, all without getting out of bed.

Basically, this record player comes with a wide range of features and allows you to listen to your favorite music in a variety of ways. The sound quality is excellent and the speakers are impressively loud, which is surprising for a record player in this price range.

When I say the speakers are louder than expected, I don’t mean that they’re quite loud enough to entertain with. If you’re planning on hosting a party in the home, you’ll want to hook the record player up to a set of active speakers using the RCA jacks.

Buyers will definitely love the Bluetooth connectivity, which allows you to stream your favorite tunes, wirelessly, via your smartphone, iPad, or any other type of wireless device.

The Navigator is also covered by a limited one-year product warranty, which takes the risk out of your purchase.

When everything is added up, this is the best vintage record player on the market. Not only does it look great, but it also offers better than average sound quality and volume level, in addition to the ability to listen to your music via a variety of platforms including digital streaming and cassette tapes.

If you’re looking for a model that’s so much more than just a turntable, then this entertainment center by Victrola will be the perfect addition to your home.

These days, vintage style record players are a big hit. Not only do they encapsulate everything record players were and are, but they come loaded with modern tech that makes them both eye-catching and fully functional.

But there are many styles of vintage record players to choose from. Some like this Victrola are modeled after early players that were popular over one hundred years ago.

Others are modeled after the suitcase style record players that took the industry by storm in the 1950s and 1960s. They were available in a range of sizes and offered something older styles did not: portability.

It is a suitcase style player that gives the Navigator a run for its money, with a lightweight design that makes it easy to transport and store, Bluetooth connectivity, USB play function, and built-in speakers.

It comes with some of the same features including a three and a half millimeter RCA and headphone jack, aux in, and the ability to play a variety of vinyl sizes. However, it doesn’t come close to the Navigator’s versatility in terms of music platforms.

Unlike this model by Victrola, the Wockoder record player cannot play CDs or cassettes, nor does it feature FM radio. Which model is better for you depends on which feature is more important to you: portability or being able to play music from a larger variety of media.

The Victrola Nostalgic Navigator Wood 8-in-1 Bluetooth Turntable Entertainment Center is versatile, beautiful, made from high-quality materials, and designed to last by a company that’s been in business for more than one hundred years.

When you buy the Navigator, you’re buying a record player, plus so much more.

The Navigator by Victrola is loaded with a wide range of features, including digital music streaming, cassettes, CDs, vinyl records, and FM radio. Even more features than the Victrola Aviator.

The price is incredibly low considering what you do get and it is a well-made player. For those reasons, I gave this model a Top Record Players rating of 5 out of 5.

Victrola Navigator 8-in-1 Stereo System
5.0
$149.98
View On Amazon
We earn a commission if you make a purchase, at no additional cost to you.