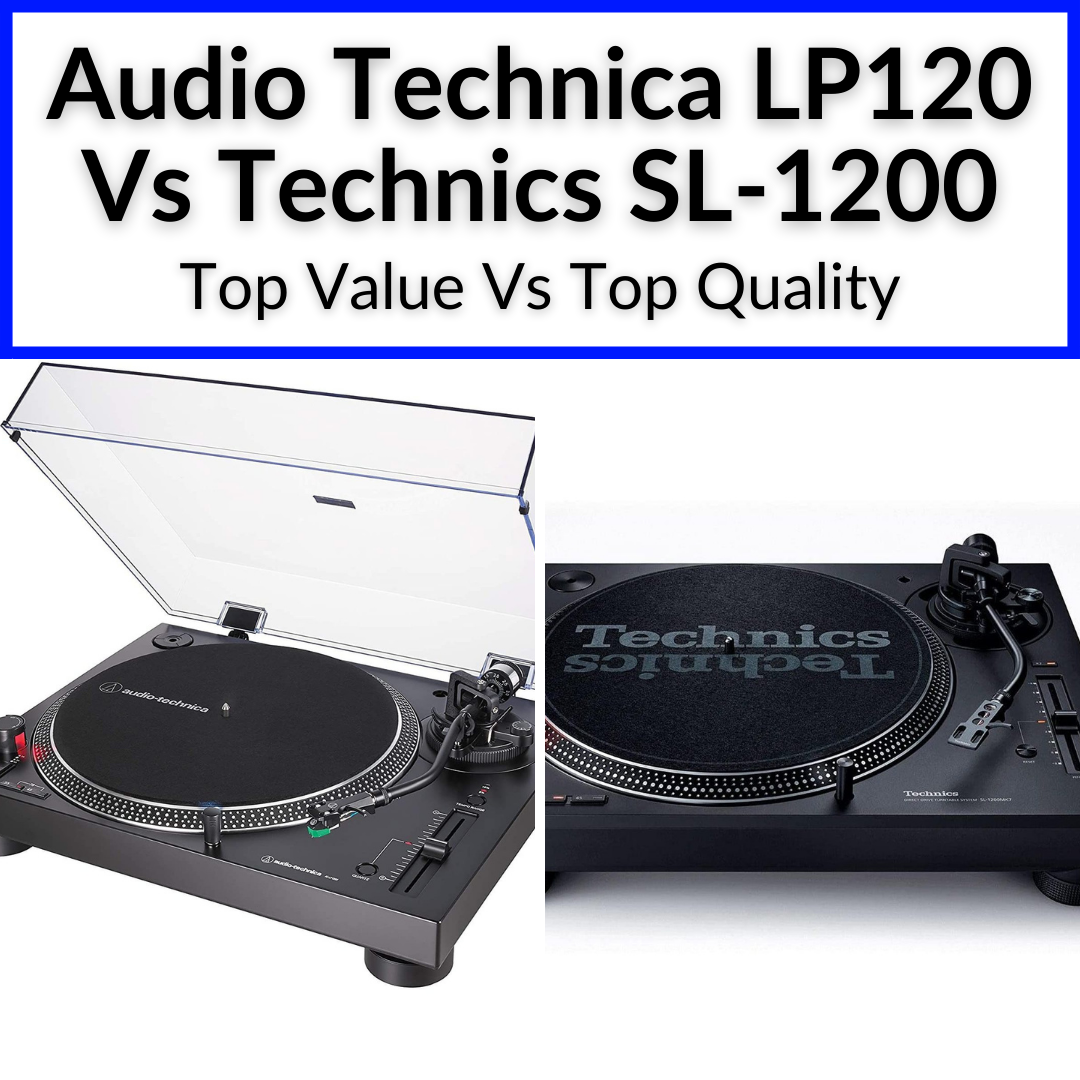 Many consider the Technics SL-1200 the best turntable ever made.

It was first released in 1972 and has been upgraded many times since.

The Audio Technica LP120 is modern copy of the SL-1200. It looks virtually identical.

But is it really an exact copy?

Given the huge difference in price, it can’t be, can it?

No. Despite the looks, these two record players are quite different.

Keep reading for a complete comparison of the Audio Technica LP120 and the Technics 1200.

One of these two turntables will be far better suited for you than the other. We’ll help you figure out which one.

We’ll begin our comparison by taking a brief look at each turntable individually, before going into the differences and similarities between the AT-LP120 vs the Technics 1200. Then we’ll look at the advantages of each and help you determine which one is the right choice for you.

Audio-Technica AT-LP120XBT-USB
4.5
$399.00
Pros:
Cons:
View On Amazon Our Review
We earn a commission if you make a purchase, at no additional cost to you.

The AT-LP120 is a direct drive turntable made by Audio Technica. It is a fully manual turntable, meaning you need to make all of the tonearm’s movements. There are no auto-return or auto-stop functions.

It has 3 speeds, 33, 45, and 78 RPM, which are selectable via the buttons on the top of the unit. It has 2 different outputs: analog left and right RCA, as well as USB output which you can use to hook up to your computer and rip the vinyl records to your digital library.

It is priced right in the middle of the mid-level turntable market. I like it quite a bit and I have quite a lot of experience with it, since I own one and listen to it almost daily.

It comes with a variable pitch slider, which you can use to dial in the correct speed for your album, if it needs some adjusting. It also comes with its wall-wart style power supply, which converts A/C power to DC. The exterior DC converter is a nice touch, because it keeps the unit quieter. The Technics 1200 is a short nickname for the Technics SL-1200. It was the catalyst for the start of what we now call DJ culture. These turntables started becoming popular in the 1970s and many still consider them the best turntables ever made.

As more features are added, the popular and winning design keeps going and keeps the name SL-1200. Today you can purchase a new Technics SL-1200 MK7. If you are interested in previous models, we have a detailed comparison of the Technics 1200 MK2 vs MK5.

It has an aluminum S-shaped tonearm which helps to give you precision tracking without skips.

It is a high-end turntable that costs somewhere around the 1k mark (give or take a few hundred), depending on where you find it. To many enthusiasts today, the Technics SL-1200 MK7 is the gold standard for direct-drive turntables.

Difference Between Technics 1200 And AT-LP120 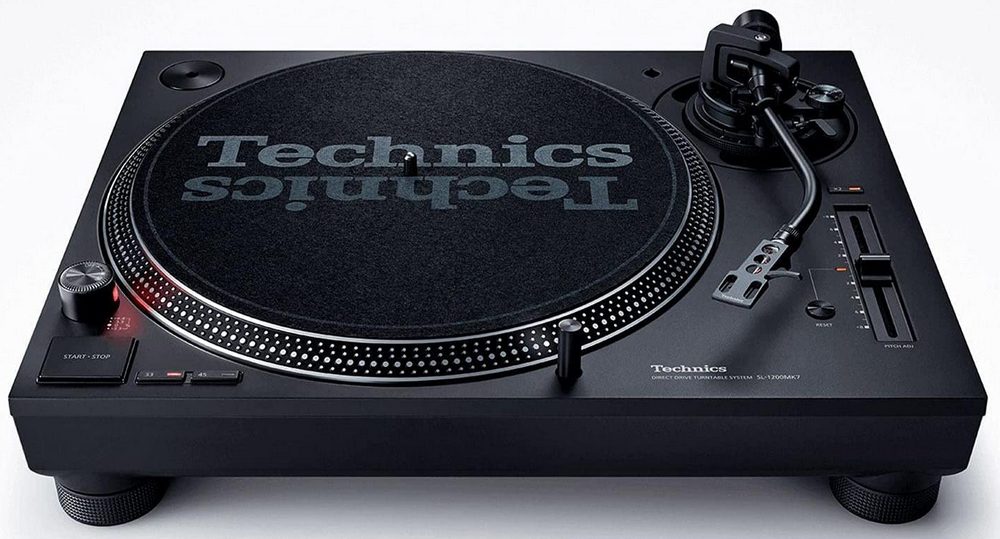 The Technics SL-1200 MK7 costs four time what the AT-LP120 does (roughly). The price difference is the most notable difference and the most obvious when comparing them side by side. But there are obviously other differences.

The Technics SL-1200 MK7 does not have any USB output, only analog outputs. This is a real bummer for me, because if you want to rip your vinyl records to digital with the SL-1200, you have to do it the hard way with a converter.

For the extra several hundred bucks this is a feature they really should have included. The much less expensive AT-120 has a USB output and they even give you the cable.

The strobe light that points at the platter on the Technics can be set to red or blue, whereas the AT model is only one color all the time.

The biggest difference here besides the price is the overall quality of the audio output. With much more expensive components under the hood, the Technics just sounds better, no matter how you slice it.

Of course, you can replace the stock cartridge that comes with the AT-LP120 and get closer to the Technics sound, but there is no denying that the Technics is just a superior turntable sound-wise. It better be, for roughly four times the price. These units look like twins, if set side by side. The Technics has been around in this same form since the 70s, so it is clearly the one being copied

The AT looks nearly identical with the same buttons in the same places. Even the strobe light and utility light are in the same place. The platter looks identical, too. I suppose, if there is already a perfect design that people love, why not copy it?

This is up to you to decide. I think both these units do a great job of not adding more noise or hum to the output of the record.

A pitch control slider is present on both machines (and in the same place as well).

Both turntables have convenient strobe lights which shine on the raised specially placed dots on the side of the platter to help show you if your unit is functioning properly.

Advantages Of The AT-LP120

The price is lower by a lot. It is several hundred bucks cheaper than the Technics. This is a big deal, especially if you are on a budget.

The AT-LP120 has USB output which allows you to rip your records to digital, before they start to wear out. Since records begin degrading the second you play them, it is a real bummer that the more expensive unit has no easy way to rip your vinyl collection to the digital domain.

For me, the fact that the LP-120 is a little lighter is a good thing. I do have back issues from time to time and the lighter turntable is less stressful for me to move, if I need to. Or to set up.

All kidding aside, since turntables are analog devices, a closed dustcover will amplify all the vibrations in the room and you will hear them in the output of your unit. This is a real thing I can hear myself. For that reason, most serious audiophiles immediately discard the dustcover when they get a new turntable.

Advantages Of The Technics 1200 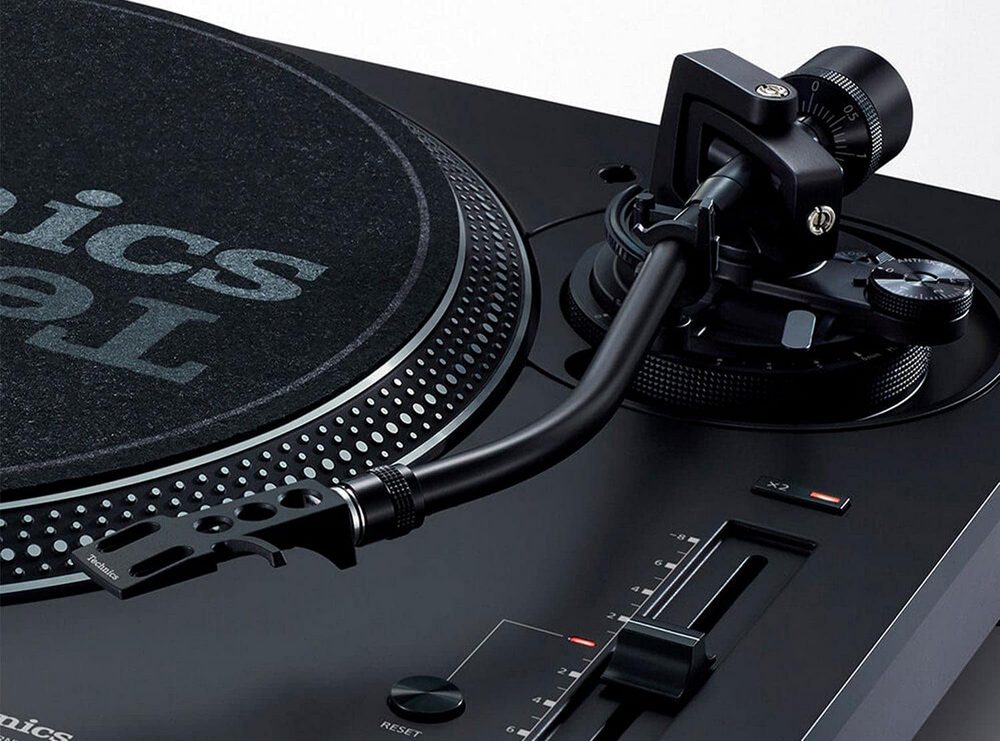 Well, the price is definitely not one of the advantages. But seriously, the quality of the SL-1200 MK7 is on another level than that of the Audio Technica LP120.

It is almost not fair to compare these units because the pedigree and build quality of the SL series from Technics is almost legendary and the fans of this unit are almost a cult. They are that raving and adoring.

This is for good reason, because this is one of the best sounding turntables you can get, as far as direct drive DJ-friendly ones go.

The sound output is just better with the Technics, and DJs like to say it ‘feels’ better to work on, because the motor is of such high quality. I can’t really comment on that aspect because I have never even DJed a set for my cats.

I know this is going to sound gushing, but here we go. I love this turntable. I use it almost every day. I have heard more than a handful of great turntables in my day, and for the price, the AT-LP120 can hold its own against all of them.

If you are on a budget and can’t afford around a thousand bucks or more, the AT is for you. I fully endorse this thing because I know it is a great unit that will perform well for almost anyone.

If you have a bit more money to spend, but not quite enough for the Technics 1200, there are also higher quality models available from Audio Technica. The AT-LP1240 is a good example. Check out our comparison of the AT-LP1240 vs the AT-LP120.

If you can afford it, get it. It sounds excellent, looks great, and lasts for years and years. If you are a DJ, you probably already have 2 of them.

They may not have a ton of features, but if you are serious about the sound quality and you are actively DJing and playing paid gigs, the money you make will be worth saving up for one of these.

Also, a great bonus is that you can brag to your hipster friends that you have an SL-1200, which is always nice, because you know their broke butts don’t have one, let alone two.

The AT-LP120 might look virtually identical to the Technics SL-1200, but what is inside the unit (and what the unit itself is made from) is complete different. But so is the price.

It doesn’t come close to the Technics in terms of sound and build quality, but few do. And they all cost a lot. But the AT is one of the absolute best record players on the market today, in terms of value for money.