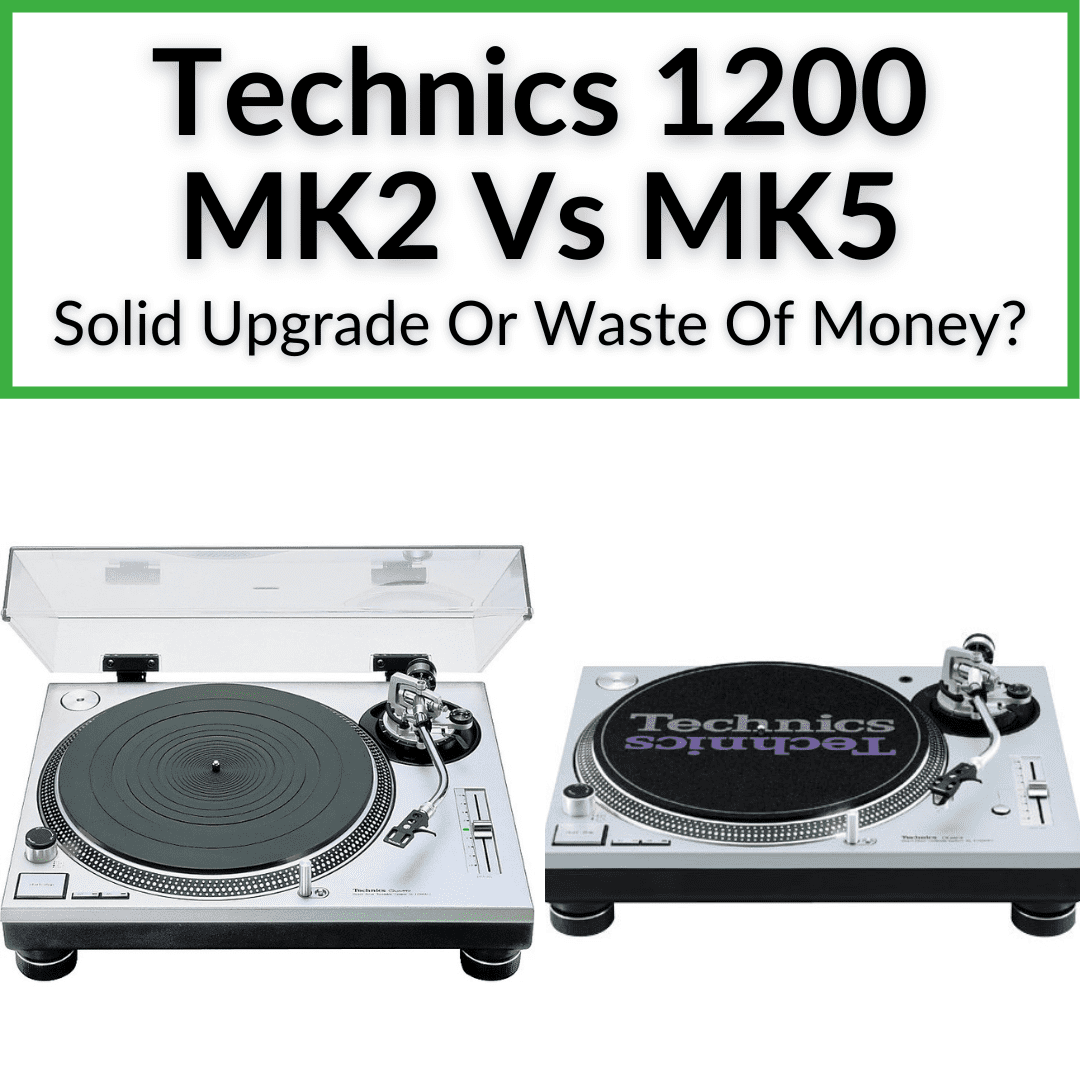 The Technics SL-1200 has become an absolute classic over the years.

It is the favorite turntable of professional DJs, but it is just as excellent at playing vinyl records at home.

The original Technics 1200 came out in 1972. Obviously, there have been many advances since then.

Those advances have been incorporated in newer releases of the SL-1200.

The MK2 was the first major upgrade. The MK5 was also a huge step.

As expected, the Mark 5 costs more than the Mark 2 (which is only available used, these days).

Is it worth the extra money?

Keep reading for a full comparison of the Technics 1200 MK2 vs MK5. We will help you figure out whether it makes sense for you to pay a bit more for the newer version, or if the MK2 is good enough.

We’ll begin our comparison by briefly looking at each unit individually, before going into the similarities and differences. Then we’ll discuss the advantages of each and help you determine which one is a better buy for you.

The full name is the Technics SL-1200 MK2. The SL is omitted in casual conversation, since these turntables are infamous at this point. This is probably the most popular turntable you will see being used in clubs by DJs, and has been so for years.

It is a direct drive quartz-locked turntable that comes with a variable pitch slider, 33/45 RPM switch, adjustment strobe light, and a dust light. It also has a removable dust cover.

It comes with special adjustable feet and a heavy rubber base that helps minimize rumble and environmental noise. It has a very high torque motor and a low-mass tonearm with a gimbal suspension. This is probably the most popular turntable for DJs right now.

The MK5 is a newer version of the MK2. As such, the 1200 mark 5 is also a direct drive turntable that is also a favorite of DJs.

Similarities Between The MK5 And MK2

These are both SL-1200s. They are practically the same unit for all intents and purposes. One is simply an updated version of the other.

They both share the same DC brushless motor. It is a very high torque motor that is designed to take a heavy platter from dead still to full speed in a fraction of a second.

They have identical anti-skate mechanisms. There is a dial you turn to set the anti-skate level. Anti-skate is a spring that will add or release resistance on the tonearm and keep it from sliding horizontally out of the grooves when your record is moving.

They look identical at first glance. There is a square plinth, slider for pitch control, a start button, speed switches for 33 and 34 rpm, a strobe light on the side that lights up the edge of the platter, and a dust light as well.

Speaking of the form factor, the Technics SL-1200 series is the blueprint for the majority of mid to mid-high level turntables that are manufactured today.

My AT120 has exactly the same look and feel with the same features (at a slightly lower price). It should be mentioned how influential the SL-1200 has been in the world of turntables, especially DJ units. See my comparison of the SL1200 vs AT120 for more.

Since the MK5 is an updated version of the MK2, you would obviously expect some improvements. Here are the main differences between the two models.

The MK5 has a pitch control reset switch that is not present in the earlier versions. The old pitch control reset was automatically engaged when you placed the pitch slider in the center detent, but the switches were notorious for wearing out, so this is a sensible upgrade.

The tonearm is different on the MK5. It is more of an S shape, and it has different wiring inside that is supposed to be better and last longer.

On the MK5 there is a little circle hole on the back of the unit where you can store a spare cartridge. It is just a cosmetic change, but it is convenient if you have a backup cart. It keeps you from having to dig around for your backup.

The platter is slightly heavier and made from a bit of a different metal.

The plinth on the MK5 is different. It is a little bit heavier and is said to help dampen vibrations a little better than on the MK2.

Yes, the MK5 does not come with dust cover hinges. These were annoying on the MK2 because most DJs would put the unit into a road case and the hinges would stick out and keep the units from having a perfectly flat footprint. You can purchase the hinges if you want them, but they do not come standard on the MK5.

The power switch was a point of irritation from the start. The collar that goes around the edges of the switch was the switch. It is right next to the platter, and you could easily accidentally turn the unit off if your arm brushed against it. This was fixed with the MK5. You have to actually touch the top of the switch to turn it off with the MK5.

Advantages Of The Technics 1200 MK2

The MK2 is an iconic turntable that is one of the most popular decks in the world. If you decide to find one of these (they are not made anymore), you will pay a bit less than you will for an MK5.

It is a little bit simpler as a turntable, since it is an earlier model. It does come with hinges for the dustcover. That is a nice thing to have, if you are listening at home and not traveling to DJ sets all the time. For DJs, the hinges are mostly just annoying.

Advantages Of The Technics SL-1200 MK5

The MK5 has all the improvements listed above, which were implemented after customer feedback. It has a better tonearm, plinth, power switch, and platter.

I am not sure if it sounds any better, but it certainly should. The small upgrades they made over the years are all here on the MK5, so it is technically a more advanced turntable.

Why To Get The MK2

The MK2 is the one for you if you are looking for a classic. It is the original and it’s hard to find a DJ that does not love the MK2.

It has its issues like the power switch being easy to hit accidentally, and the speed lever reset switch wearing out quickly, but overall, it is a classic. There is no doubt that the MK2 is one of the most sought-after and popular units out there today.

Why To Get The MK5

The MK5 is going to cost a bit more, since it has some upgrades, but most of the price difference in any turntable is going to be the cartridge. If you have a decent budget and want a more modern and fancier unit, the MK5 is for you. You will not be disappointed with either though. They are both classics.

What About The MK7?

The MK7 is the newest version of this classic turntable and it is the one that is currently most readily available. If you are looking to buy new, it is probably the one you’d want to get. In comparing the Technics 1200 MK2 Vs MK5, we find exactly what we would expect to find. The MK5 has some key improvements over the MK2, but overall, they are the same great turntable.

If you are a DJ, the Technics turntables are the standard. If you are listening at home, there may be some features you don’t need, but you’re still getting an excellent record player that sounds great. There is a reason the SL-1200 has achieved “classic” status.