The 1byone Nostalgic Wooden Record Player is one of the bestselling vinyl record players on the market. 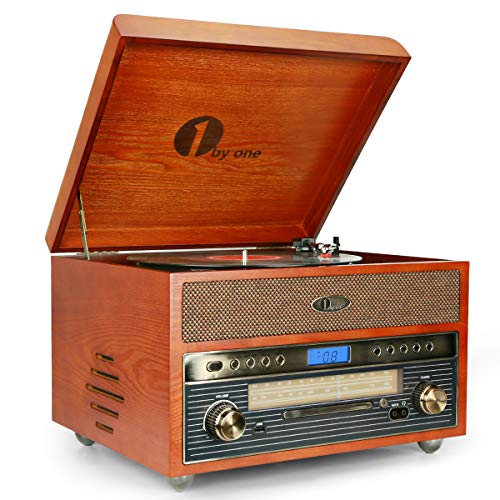 1byone Nostalgic Wooden Record Player
4.5
$399.00
Pros:
Cons:
View On Amazon
We earn a commission if you make a purchase, at no additional cost to you.

The attractive retro-inspired design that takes us back to a simpler time has a lot to do with that, as does the attractive price.

Few record players I’ve reviewed in this price range are this multi-functional.

It also has built-in stereo speakers that fill your room with a warm hi-fi sound. You can also hook it up to external speakers or your existing stereo system.

It has a wireless transmitter that allows you to play music from any wireless device from anywhere in your home and it plays all three speeds of vinyl. 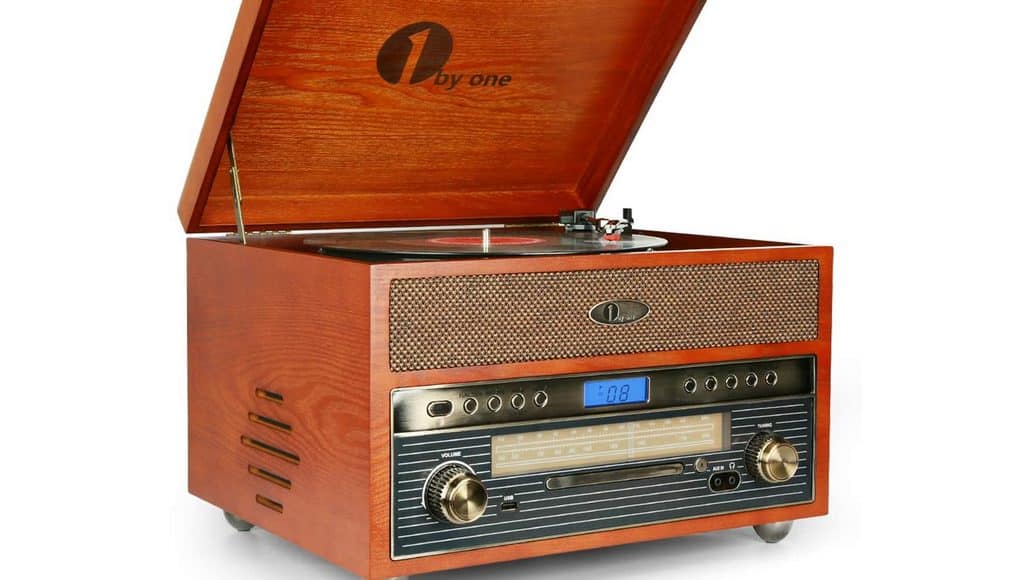 The 1byone Nostalgic Wooden Record Player is one of the most popular turntable players, because it sells at a low price, considering the long list of useful features. That’s why it made both my list of top record players under 200 dollars and my list of best overall record players.

It is basically a full stereo system. It plays vinyl records of various sizes at different speeds. It also plays digital files, CDs and cassettes, and comes with an AM/FM radio player.

Its built-in speakers are powerful for their size and produce clear hi-fi sounds. They do not, however, match the output of high quality stereo speakers. That would be too much to expect at this price. But it has RCA outputs, so you can easily connect external speakers.

It also has a 3.5 mm headphone jack, a USB port and a 3.5 mm auxiliary input port to connect your smartphone, tablet or other devices.

Most users get the 1byone because of its retro-cool styling. They want a player that reminds them of bygone times. But they don’t want an actual old-school player. Those lack all modern features.

What’s so cool about this turntable is how the manufacturer filled a vintage exterior with a modern interior. In addition to playing more modern forms of music, like CDs (yes, I know, not so modern, but more so than vinyl) and MP3s, it also has Bluetooth capability.

The Bluetooth function allows you to connect your smartphone or other device and play music from it, without having to connect via the aux-in port (which you can also do). The function is somewhat limited though. While you can connect to Bluetooth headphones, you can not connect to external bluetooth speakers.

To me, the ability to connect wirelessly to a pair of speakers is far more important than the ability to connect to my phone. I know this is not the case for everyone, but because I already have Bluetooth speakers, I can just connect my phone directly to those and would like to be able to do the same with my record player.

It is for that reason that I docked some points in my rating. Overall, I give this unit a Top Record Players rating of 4.5 out of 5.

1byone Nostalgic Wooden Record Player
4.5
$399.00
View On Amazon
We earn a commission if you make a purchase, at no additional cost to you.

The closest competitors to the 1byone are the Crosley CR704D-PA Musician 3-Speed Turntable and the Victrola Nostalgic Navigator 8-in-1 Turntable Wooden Entertainment Center.

Both of these products have a similar iconic vintage look, but they cost quite a bit less. The lower price is mainly due to a lack of a few key features.

Both are also equipped with good speakers that provide high-quality sounds and they can also be connected to a number of external devices using the aux-in jack or Bluetooth.

The Crosley CR704D-PA record player stereo system is slightly smaller than the 1byone and weighs about 2 pounds less. It is also equipped with built-in Bluetooth and full-range speakers that enable it to stream music wirelessly from other devices such as tablets, Androids, iPhones and smartphones.

The product’s assembly is housed in an elegant and classic-styled cabinet. It can play all types of vinyl records at 3 different speeds and has a vinyl-to-MP3 recording function. Moreover, it comes with a 3.5mm auxiliary input jack, USB connector for flash drives and AM/FM radio.

What is lacks is the ability to connect external speakers though any means. Bluetooth will not work for speakers and there are no RCA outputs. There isn’t even a headphone jack, so your only listening option are the built-in speakers.

Like the other two, it has Bluetooth technology that enables it to wirelessly stream music from other devices at a distance of up to 33 feet. It can play all types of vinyl records at 3 different speeds, has a CD and AM/FM radio.

Unlike the Crosley, the Victrola can connect to external speakers, but only via the headphone jack. It has RCA inputs, but not outputs. Bluetooth can not connect to speakers.

Overall, the 1byone Nostalgic Record Player is the best option for most people. It costs more, but it allows you to connect to external speakers via RCA (or headphone jack, if you so choose). It is also made with slightly higher quality components

If you don’t care to use external speakers, either of the other two options are better. They both cost quite a bit less, so you can save a lot if this feature is not important to you.

If you are fine hooking up speakers via the headphone jack, then the Victrola is a great choice that will save you money. Headphone jacks are limited, though. They won’t work with all speakers, especially not high quality ones. They also won’t allow you to connect to a receiver as part of a stereo system.

In the end it comes down to two things: whether you want to have the ability to connect to external speakers or to a receiver and aesthetics. If you don’t care about the speakers and everything else is equal, just get the one that would look best in your home.

1byone Nostalgic Wooden Record Player
4.5
$399.00
View On Amazon
We earn a commission if you make a purchase, at no additional cost to you.