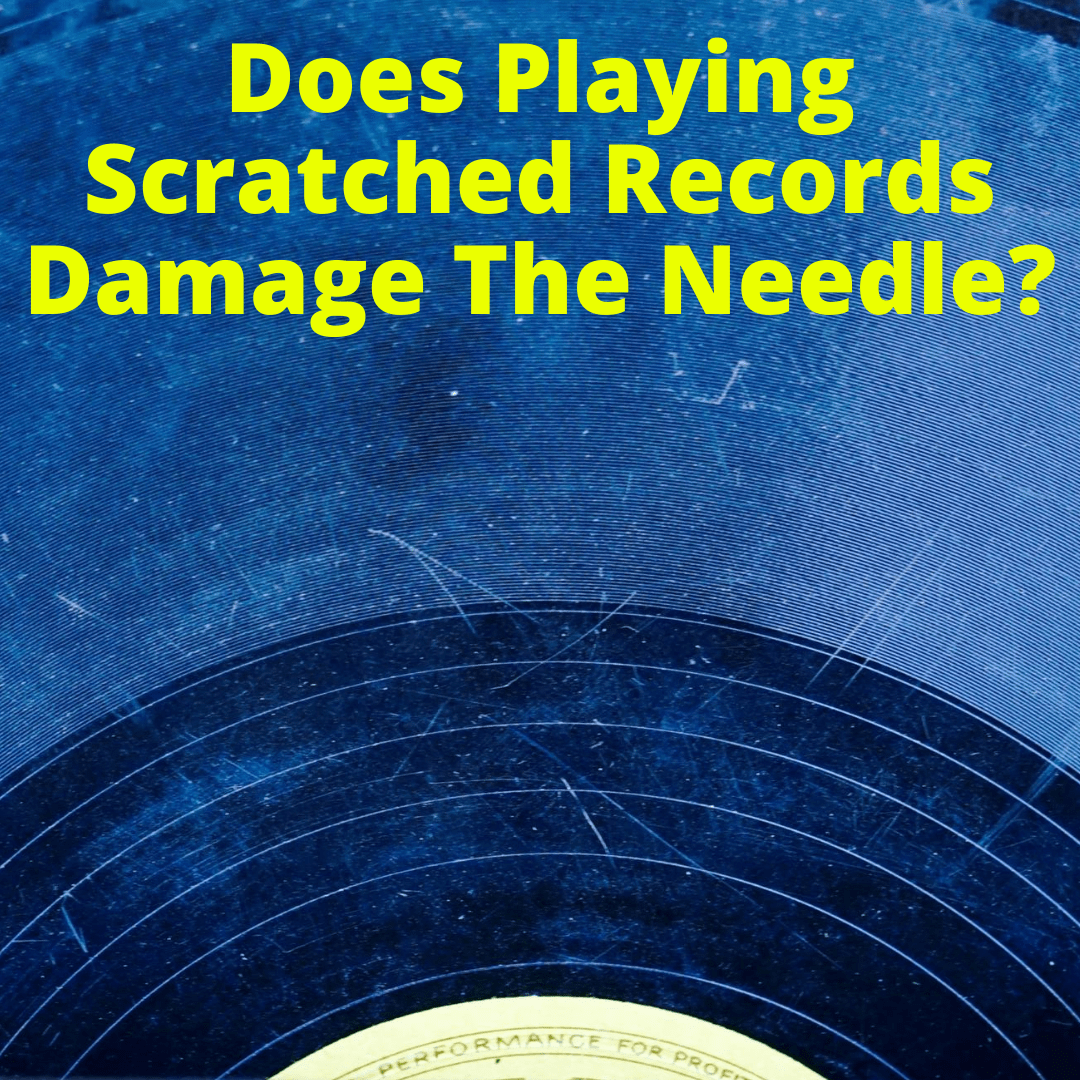 Your record has a scratch. It will never sound perfect again.

Worse, your needle just hit that scratch and judging by that loud pop, you’re going to have to replace it.

Are you sure playing a scratched record damages your needle? Do you really need to get a new one after it hits a scratch?

Or maybe not after every scratch, but eventually it will be one too many…

It does not. The needle, or stylus, is made of hard precious stone, and records are made of plastic. These stones are harder than the plastic, so they can withstand the rigors of an uneven surface.

But that pop you hear when the needle traces its way over a scratch is enough to stop your heart. Surely it must be causing some damage.

Let’s investigate this further, starting with the needle. Also called the stylus, this tiny, sharp object is made of diamond or sapphire. As I’m sure you know, diamond is quite hard, so it’s not very easy to damage or break. And sapphire is not much easier to break. Records aren’t quite as strong. They’re made of vinyl – a type of plastic. And it’s not the hardiest of plastics.

Records get scratched for a whole lot of reasons, and none of them really require that much force: getting dropped, being stacked on top of each other or otherwise not stored properly, being placed on surfaces other than the turntable, being removed from and slipped into their covers, and even, according to a rather bitter Quora forum contributor, “letting other people handle them.”

If you had to pit the two against each other in a fight, which would you put your money on to win? Probably the needle, right?

The diamonds and sapphires can withstand the jarring from a scratch in a vinyl record, even if your ears can’t. The plastic simply isn’t strong enough to cause enough damage to be too worried about.

That then begs the question: do styli get damaged at all, if all they ever do is run over this softer material?

Simply put: yes, because of wear and tear. It gets to everything eventually, even the toughest, highest-quality needles. And playing a lot of scratched records might speed this process up a bit.

Perhaps you have a needle that was rendered useless quite quickly and you’re thinking to yourself: “My needle couldn’t have possibly gotten damaged so quickly simply from the average wear and tear….”

So if it’s not scratched records or the ravages of time that have damaged your stylus, what was it?

What Can Harm The Stylus?

Other than time, i.e. hours spent running through the grooves of spinning records, there isn’t too much that can damage the stylus.

Except dirt. And dust. And don’t forget tiny little pieces of grime that get stuck in your record’s grooves. They’re all bad for your record, and they’re bad for your stylus. They wear down and grate at your needle, similar to the way flowing water erodes weathered boulders.

Over a shorter amount of time than you think, constantly playing dirty records will wear down your stylus to the point of the needing to be replaced. Scratched records do this too, but dirt is much worse. And as the needle gets more and more damaged, it just begets more problems.

Dust-worn needles fight back, damaging the grooves in your vinyl records with their jagged edges. If ever there was a reason to keep your records clean, it’s that (I mean, besides the fact that your records simply sound better if they’re clean).

But how do you know when you need to take the plunge and replace your needle?

When To Get A New Needle

This depends entirely on how clean your records are, and how much damage the dirty ones have done to your stylus.

I’ll say it again – keep your records clean, people! If you do, you’re likely to get at least 1000 hours of play out of your needle.

That’s according to some manufacturers, at least. According to the commenters on this youtube video, you can use one needle for as long as 3000 hours.

That means that if you used your record player for 1 hour a day, every single day, you could use the same needle for just over 8 years. Just keep an eye on it and learn how to tell when a stylus is bad.

If you’re more inclined to stick to the manufacturer’s guidelines of 1000 hours, you’d still get almost 3 years of playing records from a single stylus. If you exclusively play records with a dirt on them (please let this not be the case!), then you won’t get as much love out of your needles. The actual number of hours you’ll get out of it is a little harder to predict.

It all depends on how dirty your records are, and how dirty they make your stylus. Here are some instances where you might need to change your stylus.

We mentioned earlier that you might hear a popping sound that’s enough to put the breaks on the blood in your veins. That pop, or any other distortion or muffling sounds that your record shouldn’t necessarily make, is the first sign that things might be going awry.

Once your needle is on the suspect list, you can use a high-powered magnifier (if you have one available) to take a look at the nitty-gritty details on your needle. Things you need to look out for are jagged edges or bends in, or black grime on, the needle head. These are signs that your stylus needs to be replaced.

If your needle ever does that horrible thing where it just completely jumps out of the grooves and skirts along the vinyl, that’s a pretty obvious sign that you should treat yourself to a new one. If it skips occasionally, it’s probably the record and not the needle. If you’ve just come into possession of a second-hand turntable, it’s highly recommended that you change the needle before playing anything on it. There is no way of knowing for certain how old the needle on the turntable is, or the condition of the records the previous owner played, or how well they looked after the whole unit.

And when it eventually gets to that time, you need to know how to change your needle.

How To Change A Damaged Or Old Needle

There are two ways to replace your needle: replace just the needle, or replace the entire cartridge. This depends on how your cartridge is made.

Most moving magnetic ones will allow you to just replace the needle. Moving coil carts will generally require you to replace the whole cartridge.

Do this by holding on to and stabilizing the tone arm, and pulling the plastic or metal casing that surrounds the stylus out of the cartridge. The only thing you need to take into consideration here, is to make sure not to damage the cartridge, so remove the stylus carefully.

You can either look for the serial number on the needle you just removed, and search for a replacement for that exact model online, or you can upgrade if you want to improve the overall sound quality of your turntable.

If you upgrade, just make sure to check that the replacement is compatible with your turntable. A quick Google search will answer this. And just like anything, the better the stylus you want, the more money you’ll have to spend.

To start, stabilize the tone arm again. Then, with the needle pointing downwards, slide the new stylus back into the arm. You should hear a click once it’s fastened, but if you don’t, just make sure that it sits in the cartridge securely.

Be careful when you handle the new needle – it’s perfectly calibrated when it comes out the packaging, and you don’t want to accidentally set it off kilter before you even get to use it.

Most turntables can use a wide variety of cartridges. But it’s worth researching which models do actually fit your turntable.

Unplug the turntable first – you don’t want any nasty shocks. Brace the headshell, and then slide the cartridge out. If your cartridge is attached to wires, use a pair of pliers to gently remove them.

Using a screwdriver, remove the screws that hold the cartridge to the headshell. Hold the tonearm while doing this so that the cartridge stays stable.

Hold it by the back half, and place it on the bottom of the headshell. Move it around until the screw holes line up.

5. Make sure the cartridge is aligned to the sides of the headshell

6. Put it all back together

Screw the cartridge into the headshell. Then, if necessary, carefully reattach the wires to the back of the cartridge.

A lot of things cause wear and tear on the needle over time, but playing scratched records does not have much of an effect. Stylii are made from diamonds or sapphires, both of which are far harder than the grooves on a vinyl record. Scratches will not cause additional damage to your needle.

That said, the needle will wear down over time, whether you have scratched records or not. And the more it wears down, the worse sound quality gets and the higher the risk of damaging your vinyl. So make sure you replace that needle regularly!