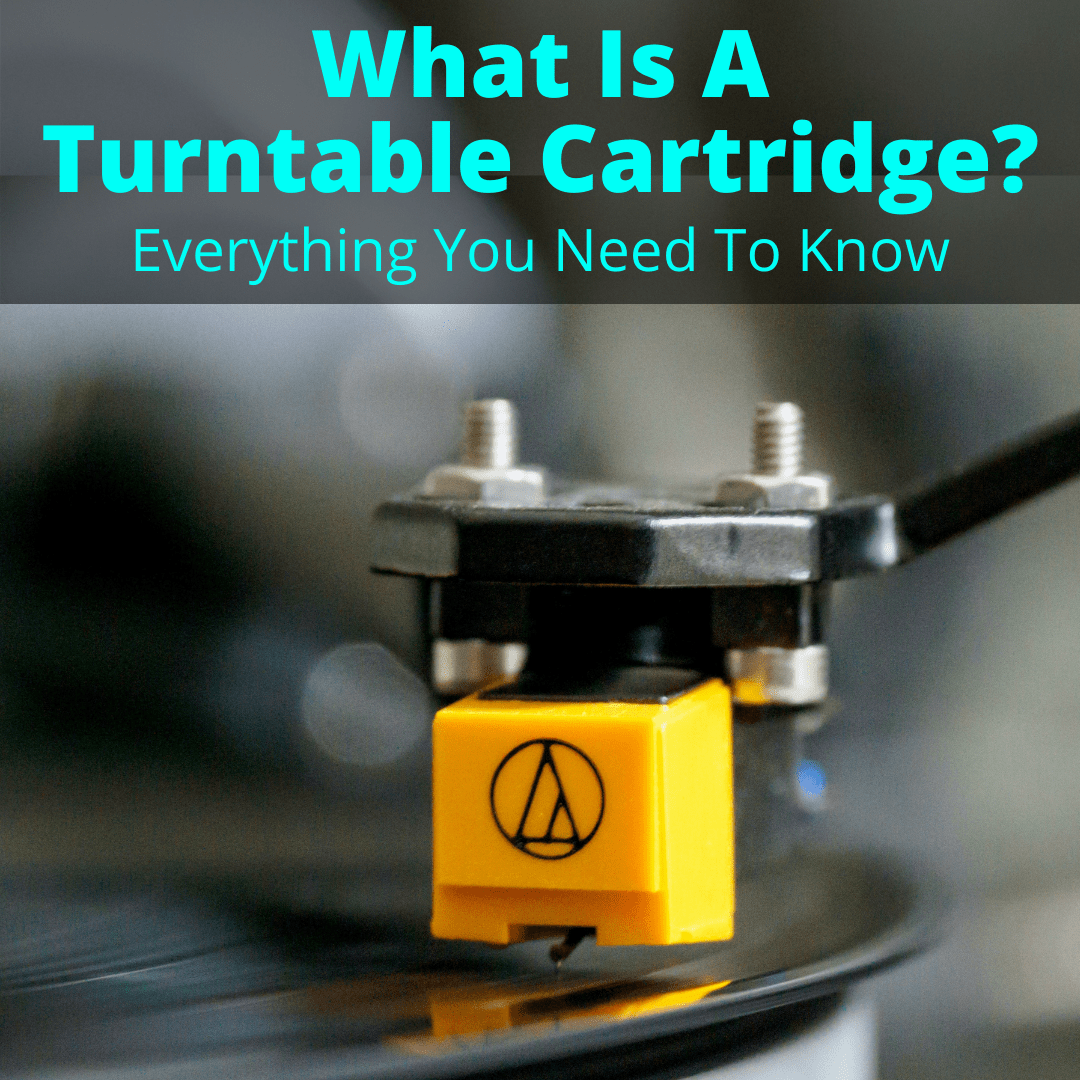 Do you want your records to sound better?

Then get a new cartridge.

Seriously, this is the best record player upgrade you can make. Nothing else gives you more bang for your buck, especially if you currently have a stock cartridge.

A high quality cartridge makes a world of difference.

But what is a turntable cartridge exactly? What does it do and how does it work?

Keep reading to learn everything you need to know about record player cartridges.

What Is A Turntable Cartridge?

A turntable cartridge is the mechanism that holds the stylus, which translates the grooves of a record into a signal that can become sound.

Every turntable has a cartridge, or it can make no sound. Cartridges are lovingly referred to as carts by vinyl collectors.

Parts Of A Phono The cartridge is made up of 6 different components. Each one of them must be present and functioning for the cartridge to work properly.

Without the coils the cartridge could not generate a strong enough electrical signal to make sound. Usually, the coils are on top of the rest of the components.

The pole pieces are metal pieces attached to the bottom of the coil. They are used to concentrate the magnetic field to make the signal more effective.

Not every cartridge has the exact same pole piece setup assembly. They are all slightly different. At this level, every small change has an effect on the resulting sound.

Without the pole pieces the electromagnetic magic would not work properly and the sound would suffer.

Every phono cartridge has magnets, no matter what type of cartridge it is. There are two distinct kinds of cartridges (more on that later) but they all must have magnets inside.

The magnets are one of the most important components inside the cart. Without them, the physics of how these things work would break down. You can think of the cantilever as the ‘stylus holder’. Its main function is to hold the stylus and carry the vibrations to the magnets and the coil assembly further back in the cartridge.

The cantilever is suspended in rubber which allows it to vibrate freely with minimal resistance. These vibrations are the beginnings of the actual audio signal.

The cantilever is held in place by a rubber piece that keeps it secure, while still allowing it to vibrate enough to translate the physical motion into an electrical signal by interacting with the pole pieces and magnets.

The rubber suspension is attached to an inside housing piece, which is in turn attached to the chassis of the cartridge.

The stylus is the ‘needle’ tip. It rides in the grooves of a vinyl record and transmits the movement of the grooves down the cantilever tube to the magnet and coil assembly.

Most styli have diamond tips to make them extra hard and longer lasting. The stylus is located on the end of the cantilever and looks like a little spike sticking out at the end. There are two kinds of phono cartridges: moving magnet and moving coil. These are different assemblies that do the same thing.

Both transmit physical movement into an electrical signal, which in turn becomes an audible audio signal. The way in which they achieve this goal is what makes them different.

We have an article helping you determine whether you have an MM or an MC cartridge.

These are abbreviated as MM and are the most common type of cartridge. The way these carts work is the stylus moves the cantilever which moves the magnets.

The movement of these magnets generates an electrical signal which is sent to the pins on the back of the cartridge, from where it travels down the wires to your preamp.

These are abbreviated MC and have a slightly hotter output. They work in the opposite way of the MM cartridges.

In MC carts the coils move while the magnets remain steady, and the motion of the coils generates the signal that is sent to the pins. Both types of cartridges do the same thing, but in different ways!

Moving coil carts are much more expensive and generally only found on very high end turntables, like the Rega RP6 or VPI Scout. Because the stylus is the only part of the cart that touches the record, it is important to understand the types of needles.

These are sometimes called biradial styli. They make contact against a larger area, which makes for better tracking. This is a desirable stylus for most cartridges.

This is also called micro-line and it is the highest tech kind of stylus. This tip is designed virtually by a computer. The shape of this stylus is meant to resemble the sharp edge of the cutting tip that is used to make master discs.

This is the cone shaped stylus. It is the most popular and most common stylus. It looks like an upside down cone with a sharp point.

Chances are that if you look at your stylus right now it is a spherical stylus. Spherical styli are a topic of great debate in the record listening community.

These are sometimes called stereohedron styli. The shape of these styli are meant to make greater contact with the groove walls and are said to be an improvement on the elliptical design.

How To Choose The Right Cartridge This is one of those situations where it comes down to your taste and your budget. Of course, you also must consider the physical limitations of your setup.

Not all cartridges are compatible with all turntables. The best place to start is to look in your turntable manual to determine which carts will work with your unit.

Once you know which type you should be looking for, it gets much easier. My advice for anyone looking to get a new cartridge is to never downgrade.

If you are going to get a new one, you should always go with the same one, or take a step up in the quality department.

The stock carts that ship with most turntables are always adequate but seldom great. Once you know your budget, look for the highest quality cart you can afford and go for it.

I can tell you from experience:, do not skimp on the cartridge. This is the single most important link in your audio chain, and if you get a cheap cartridge you will hear it.

Turntable cartridges are a vital component. They take the vibrations generated from the grooves in the record and turn them into an audio signal, which can then be passed on the the preamp, the amp and then the speakers.

When you get a new record player, one of the easiest ways to get a large improvement in the sound quality is to upgrade the cartridge. We recommend this to anyone getting a new turntable, unless you’re getting a budget unit, in which case the sound will never be that great.