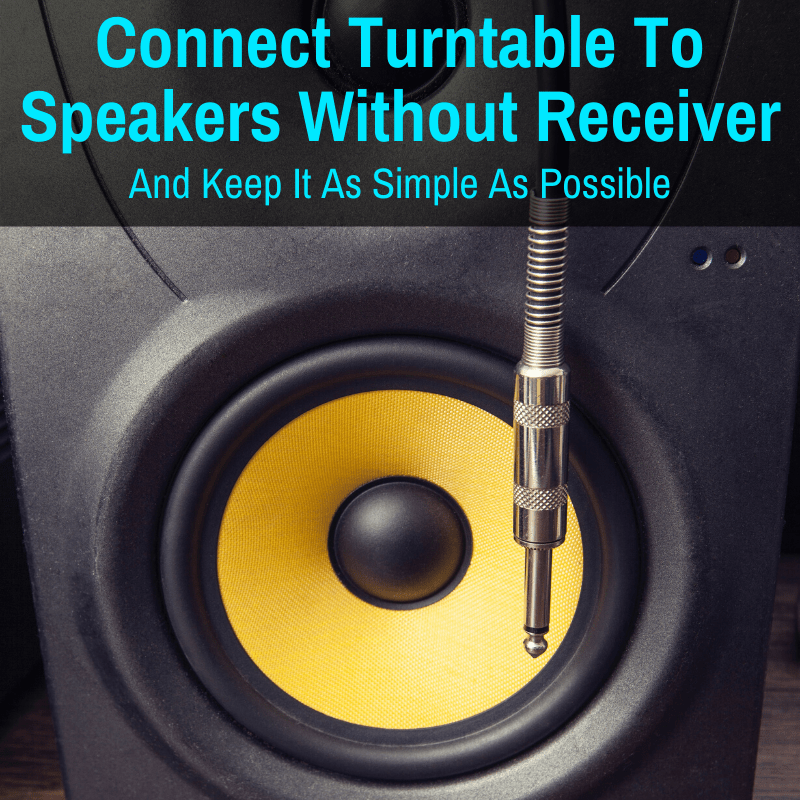 Why have this additional component (a generally bulky, heavy and expensive component), when you don’t really need it.

But do you need it?

Why do people use a receiver at all, if it isn’t necessary?

The truth is, using a receiver generally results in better sound quality

It also allows you to easily switch between audio inputs, which is a huge bonus if you have multiple audio sources, like a TV, CD player, etc.

For those reasons, most people will want to connect their turntable to a receiver.

But if you prefer to keep things as simple as possible, or if you would rather spend your money on a better record player or more vinyl records, losing the receiver could make sense.

We’ll look at the advantages and disadvantages below and also detail what you’ll need to do to connect your record player to your speakers without using a receiver.

While connecting your speakers to your turntable without the use of a receiver isn’t exactly conventional, it’s totally possible. Before we get into the how, let’s look at the why and also take a look at what a standard setup (with receiver) generally looks like.

In order to connect various video and audio components to a speaker you generally need a receiver. It has inputs for the different components and an output for the speakers. It also has an amplifier to boost the audio so that is can be played by the speakers.

One big advantage of a receiver is that you don’t have to disconnect and connect the speakers to the different audio sources, whenever you want to switch from one source to another.

The receiver allows you to connect your turntable, record player, CD player, TV, etc. all at the same time.

Want to switch from watching a movie to listening to a record? Simply switch the receiver from the TV input to the phono input and that’s it.

Without a receiver, it becomes more complicated and somewhat of a hassle to switch between each of your audio sources. You would have to manually rewire them. Or have a separate set of speakers for each source.

A standard turntable requires a few things to operate: the turntable itself, a preamplifier, an amplifier, and speakers, in addition to all of the cables and wires that are needed to connect these components together.

Receivers have built-in amps. Some models (especially older ones) also have built-in preamps. Many record players have an internal preamp, too. That said, external preamps are better, so you may want to buy one anyway.

Of course, you also need plenty of RCA audio cables and speaker wire. If your turntable (or receiver) doesn’t have a built-in preamp, then you’ll also need one of those.

How To Use A Receiver in Your Setup

When you’re setting up your system, the first step is determining where you going to place all the components. The turntable should be placed on the top since you can’t place anything on top of a turntable, for obvious reasons. You need enough overhead space to easily change records.

The receiver goes below all of the audio sources, because it is larger and heavier. If you have a CD player, for instance, it usually goes on top of the receiver and below the turntable. But you can arrange the components however you like. The important thing is how they are connected.

If the record player you have has a built-in preamp, then it should be turned off before connecting it to the receiver, if that receiver also has a preamp.

If neither of the two contain a phono stage, you’ll need to connect the turntable to an external preamp and then connect that to the receiver (more on preamps below). Connecting your speakers to the receiver is the last step.

As you can see, this is a pretty easy straightforward installation process. But why do some audiophiles prefer to get rid of the receiver?

Minimalism is probably the biggest reason for losing this component. Doing so allows you to connect the turntable directly to the speakers, reducing your setup by its largest component.

Another alternative is to just use a record player with internal speakers. This is the epitome of a minimalist setup. But because the built-in speakers are always fairly small, you can’t expect them play music at a higher volume like external speakers can. The quality is also going to be lower, of course.

If your record player does not have a preamp, you will also need to get one of those. A preamp boosts the signal from the record player so that it can be received by an amplifier (which, in this case, is inside the active speakers).

If you know a lot about using record players, then you’re probably already familiar with preamps, what they do, and why you need one. But if you’re a beginner, you may be totally clueless about their role and how they can impact sound.

On the end of the record player’s tonearm is a cartridge that generates a small voltage as the needle traces the grooves of your vinyl. This music signal is to weak for any amplifier, so it first needs to be strengthened.

The job of the phono preamp is to boost that signal, so that it is strong enough to be taken in by a receiver or other amplifier, which then boosts it further for out put via the speakers.

The preamp is also referred to as a phono stage, turntable preamp, or phono EQ. Phono is short for phonograph which is the old term used for record players.

So, you’re probably wondering where your phono preamp is. In most systems, you can find the preamp in a few different places:

Typically, the receiver has a built-in preamp that comes with a dedicated input that isn’t plugged into the turntable. You’ll also find a separate ground terminal that’s used to connect the record player to a ground wire. You can learn much more about phono preamps here.

Now that you know what a phono preamp is, it’ll be easier for you to determine whether or not your record player has one and how you can go about setting up your system without the use of a receiver.

Reading “Do I Need A Preamp If My Receiver Has A Phono Input?” will help clear up a lot of this, too.

If you decide that you need to get an external preamp, either because your record player and receiver don’t have one, or because the ones they have are not good enough, read our article covering the best phono preamps under $500.

Can You Live Without A Receiver?

You now know how to connect your turntable to your speakers and cut out the receiver. But is this really a wise move?

The receiver is considered the command center and it’s what allows you to control audio and electronic features of your system. From connecting to your TV to synchronizing your home stereo system, this type of device can be beneficial in a variety of ways.

To start, both the receiver and its remote control allow you to control all of your audio equipment with the touch of a button. The setup basically integrates everything, making it easier to manage and adjust.

They come equipped with multiple inputs for a variety of different devices. Obviously, they can be hooked up to your turntable and allow you to play your vinyl collection, so you can enjoy your favorite music at the perfect volume.

Many record players also come equipped with radio tuners and are capable of picking up HD radio formats and satellite radio programs. That means you can play those through the receiver, too.

If you get tired of listening to your vinyl or the radio, you can also opt to listen to your CD collection. Using the receiver’s remote control, CD input is easily managed.

Aside from playing audio, many modern models can also access your home theater and TV. You can use the receiver’s remote to control everything that’s on the screen, allowing you to change channels or adjust the volume.

Some older models come equipped with speaker hookups that allow you to connect two pairs of speakers, but modern receivers have a center, rear, and front hookups. These models are also designed to be hooked up to video sound.

For audiophiles who prefer the minimalist approach, a receiver can be overkill. If you want to stick to a simpler setup, removing the receiver definitely simplifies your system. It can also make it more portable.

Another benefit of losing the receiver is saving the money it would have cost. If you’re just starting out and your budget is limited, it makes sense to spend more on a quality turntable and on getting your vinyl collection started, than spending it on a receiver.

The primary drawback with this simpler setup is that you lose out on sound quality and volume. You’ll have to decide for yourself which option is right for you.

The receiver isn’t everything, especially if you more concerned with growing your record collection or want to keep your setup as minimalist as possible.

Connecting your turntable to speakers without a receiver is a fairly simple and straightforward process, but you’re going to end up compromising on sound quality. If that’s not a huge deal to you and you want to keep things simple, then all you need is a pair of active speakers (and perhaps a preamp).

And it gets even simpler and easier if you have a turntable that comes equipped with built-in speakers anyway, though the sound quality of those speakers will be even lower than the audio from a pair of active speakers.

But if you want the best possible sound quality, foregoing the receiver is not the way to do it. You’ll want a system that consists, at the very least, of a turntable, a receiver and a good set of speakers. You simply can not go without a receiver or amplifier and expect to sound quality to still be top notch.