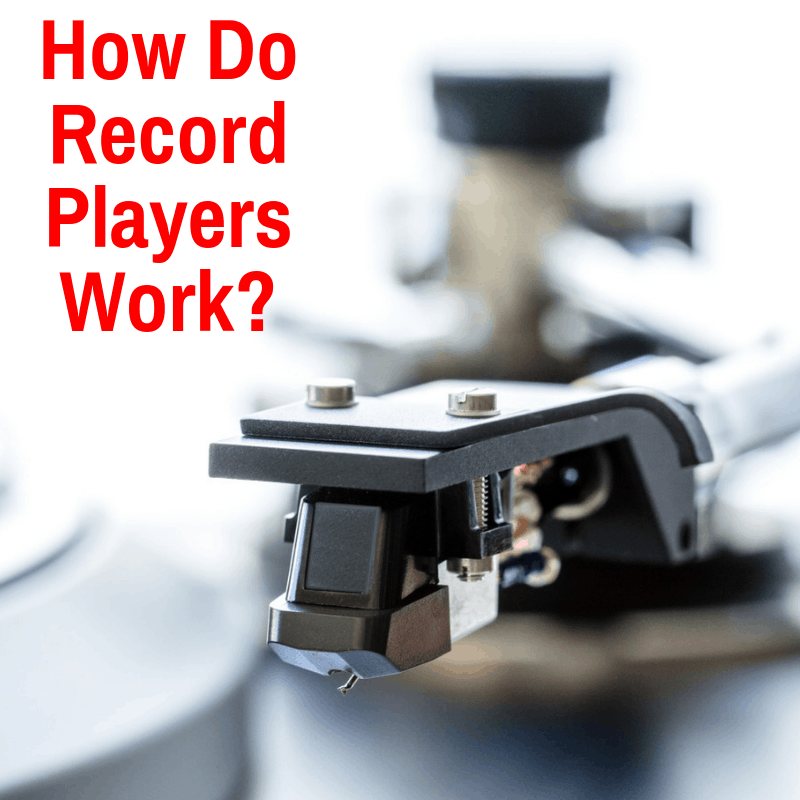 Who cares how a record player works?

You put the record on and it plays. Why does it matter how it does that?

Most people use TVs or microwaves or any number of other appliances without knowing how they work.

But the record player is different.

The quality of certain individual components has a huge impact on the final sound output.

If you know exactly how a record player works, then you know which component have the largest impact on sound quality.

That means you know which components to upgrade first, if you want to achieve a higher quality sound.

So let’s see how the components work together to create that beautiful turntable sound.

How Do Record Players Work?

Before we get into how turntables work, it makes sense to take a quick look at the history of the record player.

Brief History Of  The Record Player

Late in the 19th century, Thomas Edison invented the phonograph, from which all modern record players are derived. While the phonograph looked much different than the turntables of today, it worked based on the same principle; sound vibration. 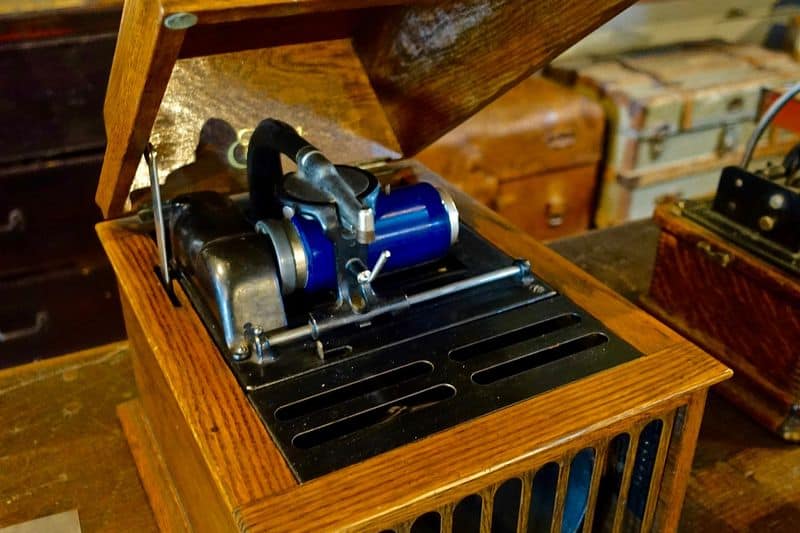 His first version of the phonograph utilized grooves that were etched into foil. He used his invention to record the song “ Mary Had a Little Lamb”, which was the first recording ever made.

From there, the record player had a rich and interesting history with design improvements made several times over the last one hundred years.

Today, we have record players that are equipped with FM/AM radio, cassette players, Bluetooth technology, and so much more. If you’d like to learn more about the history of record players and how they came to be, read this article.

In this article, we’re going to move on to the components that make up a record player.

The record player is made up of a few main parts:

In the beginning, Edison used a metal cylinder, while today, the turntable consists of a rotating platter that’s completely flat. Older turntables were belt-driven, which included the use of a small motor which would move a series of gears attached to the middle of the platter or a belt, to cause it to rotate.

While this design is still used in some models today, this method would cause the record player to start off slowly and gradually gather speed. It also caused the turntable to grind to a halt once it was switched off.

These days, most models are direct drive, which means that they’re powered with the use of electromagnets. These electromagnets can be turned on and off very quickly

At the center of the platter is the bearing, which has the job of allowing the constant rotation without any vibration or friction. There are platters that spin on ball bearings, float on a layer of oil, and even platters that rest on a tapered spindle.

There are also cheap platters, that are made out of plastic and don’t usually include a bearing. Instead, the platter will simply rest at the bottom of the spindle and rely on the friction between the metal and plastic being low enough that the drive system will be able to overcome it.

The record player’s tonearm is fixed to the base and it extends all the way to the surface of the record. The tonearm can be raised or lowered via a lever, for precision. However, it can also be placed on the record manually.

The needle is located on the end of the tonearm and it’s the part that makes contact with the vinyl, reading  the sound information that is recorded in the grooves of the record.

The friction that’s created as the needle passes over the record’s grooves works to recreate the sound that is etched the grooves. Learn all about using your player correctly here.

Many years ago, the needle used a crystal tip that generated a charge when it was compressed. This charge was amplified in order to reproduce the audible recording.

In the 1950s, the ceramic stylus replaced the crystal version and it resulted in a smoother sound that resulted in less resistance in the grooves. This, in turn, meant less skipping.

These days, diamond tipped needles are used. The tip is connected to an electromagnetic coil, which is very similar to a guitar pickup. As the stylus moves, it creates a fluctuation in the electromagnetic field that induces a charge in the coil. When it’s amplified, the charge turns into a reproduction of the original recording.

As mentioned earlier, in order to rotate, the platter must have a drive system. The drive doesn’t have to be very powerful, unless you’re looking for a turntable for DJing purposes.

Older turntables may have a type of jockey wheel drive, but you’ll want to look for a model that has a direct or belt-driven setup. Obviously, the belt-driven systems use a rubber belt, while a direct drive system has a direct connection between the record player’s platter and the motor’s shaft.

The type of motor used on a record player is important because most of the vibration comes through the motor and too much vibration can negatively impact the playback.

If you want to make sure you get a top-quality record player, look for a twin pole AC motor if you want a belt-driven model. Try to avoid buying a record player with a shaded pole motor.

If you’re looking at lower-priced turntables, many of them come equipped with DC motors, which are known for higher than average vibrations.

By comparison, a direct drive motor will usually have rotor magnets that are fixed in a ring, located directly under the platter. They’re driven by a multi-phase AC power supply just like a stepper motor.

The quality of the drive system and the motor heavily impacts the price of the record player. Learn more about the differences between direct and belt drive record players.

The creation of the vinyl record is similar to the playback process but in reverse. Instead of the stylus passing over the grooves in order to recreate the sound, an album cutter that’s connected to an input source will pass over the blank record and etch the grooves.

What Does A Preamp Do?

The function of the preamp is to boost the low voltage signal that’s produced by the record player’s cartridge to the line level, so that it can be sent to a mixer or receiver, which then boosts that signal for the speakers. Or you can skip the receiver and connect directly to the speakers, if they are powered.

You’ll need to have a preamp as part of your sound system in one of four options: separate outboard component, built into your record player, built into active speakers, or built into a receiver. Learn all about phono preamps here.

Do I Need A Special Stand For My Record Player? 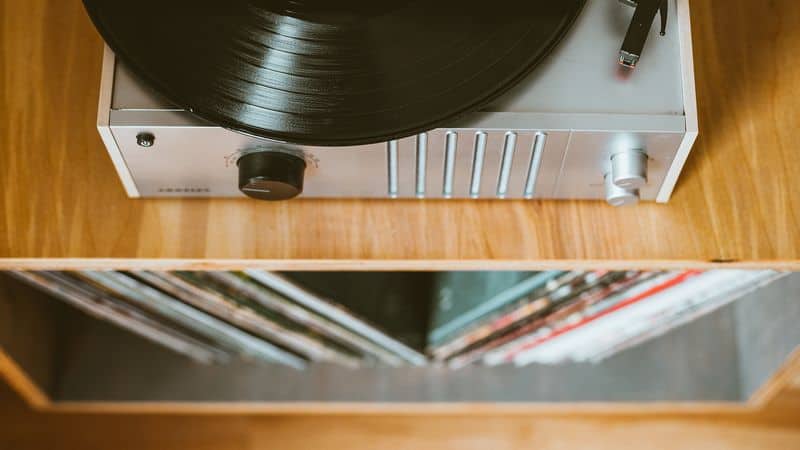 Some audiophiles believe so. Standalone systems like the Jensen JTA475W Turntable could definitely benefit from a level, permanent space.

The stand you choose will have an impact on sound quality in certain instances. It’s also what isolates the record player from the floor.

You can use a dedicated record player stand, a top shelf, a rack, or even a wall-mounted stand. Modern vertical turntables can even be hung on the wall! Regardless of the type of stand you choose, the goal of the stand is to maximize the record player’s mechanical isolation.

You may also want to take into account record storage space when you are shopping for a stand for your record player. Not all stands have a lot of, or even any, space to store your vinyl collection.

You can also get a stand that’s specifically designed for a record player only. The stands that are designed specifically for turntables can be somewhat pricey, but they’ll do a great job of maximizing sound and minimizing vibration.

What Is Tracking Weight?

Tracking weight is basically the weight that’s exerted by the needle on the vinyl. In many cases, it’s set by a counterweight located on one end of the tonearm. The counterweight can be moved back and forth via a screw thread.

There may also be a dial located directly on the counterweight that you can use to calibrate the setup.

How Many Types Of Cartridges Are There? There are three main types of cartridges:

Ceramic cartridges that are equipped with piezoelectric ceramic are often found on lower priced record players, while moving magnet cartridges are found on moderately priced models.

Moving coil cartridges are considered the go-to option for real audiophiles and they can be found on higher-priced record players. However, they are not really worth the extra cost.

Not sure what type of cartridge you have? Read “Is My Turntable MM Or MC?” for help in figuring it out.

Each component plays an important role. Using top of the line needles that don’t go bad as quickly, tonearms, and even platters will all have a direct positive impact on sound quality.

Now that you know how record players work, you can choose a model that comes loaded with the right features and components you need to get the most out of your sound system.